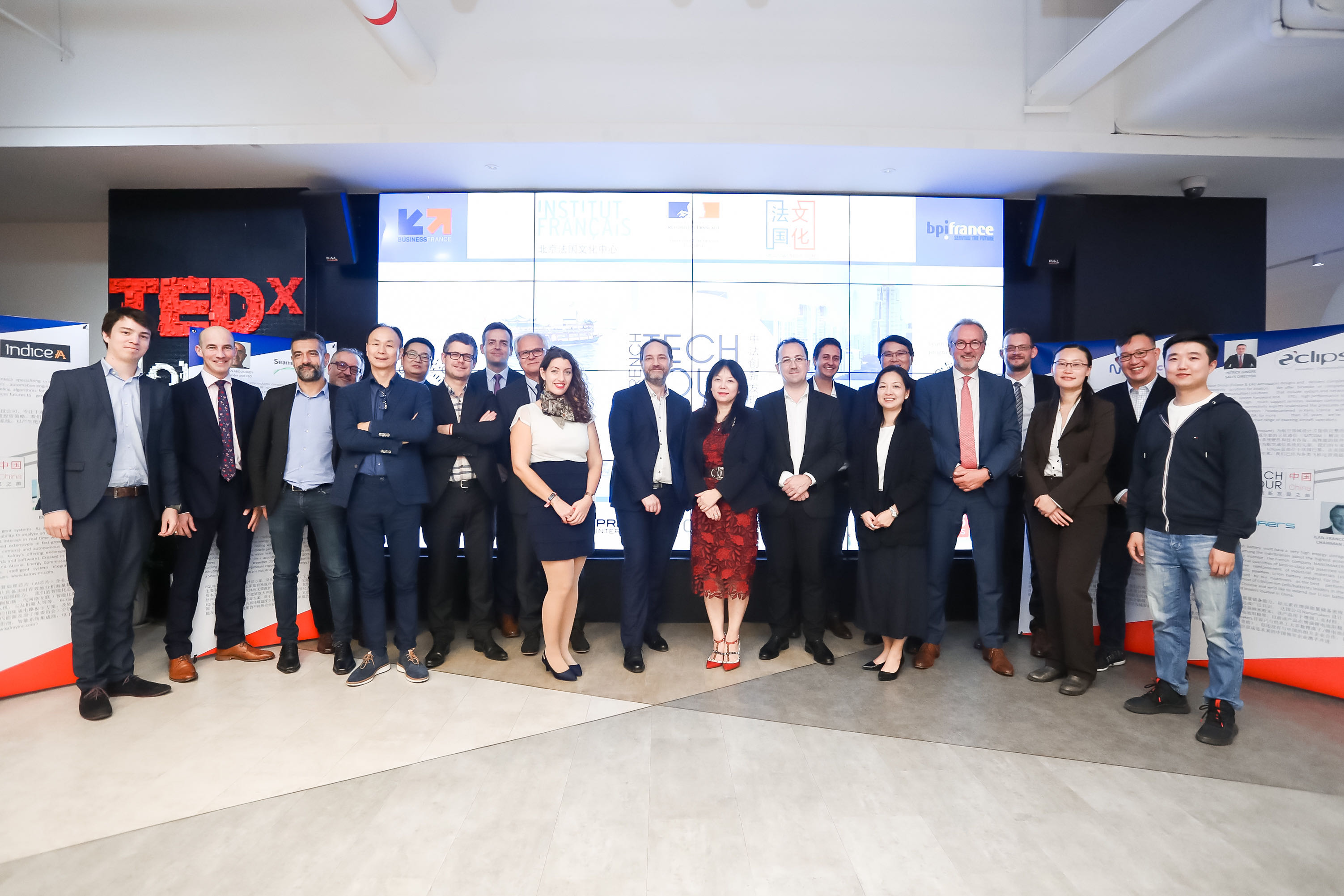 Attendees of the 8th edition of French Tech Tour China pose for a photo at Monday's event. Courtesy of the organizer

A total of 12 French startups specializing in digital and energy transition were selected to join the program of the 8th edition of French Tech Tour China, which kicked off at its first stop at Ali Center in Shenzhen on Monday night.

“French Tech Tour China aims to strengthen the links between Chinese and French companies,” said Siv Leng Chhuor, consul general of France in Guangzhou. “Among the 67 members of the French Tech Tour China alumni community, one-third of them are based in China and half maintain regular business ties with their Chinese partners.”

“It’s an immersion program that aims to help the French companies, 12 companies this year, gain better access to the Chinese market. All of these companies are going to discover the local ecosystem,” said Jerome Coustans, director of Business France Guangzhou Office.

“We have just made US$1 million with our product this year. We are working with Google, Amazon Alexa, Uber, BMW and a lot of carmakers to bring the feature of navigation into the product,” said Romain Duflot, CEO & founder of EyeLights, during his pitch, which won warm applause from the audience.

Duflot said that according to the World Health Organization, 52 percent of car accidents are caused by smartphone use. To tackle this problem, they created their company, which focuses on head-up technology. The company has two types of products, one for motorcycles and the other for cars.

The product for motorcycles is a monocular head-up display that mounts on the inside of a motorcycle helmet and shows the rider the navigation information on the near-eye optical prism.

The product for the car was recently launched and was selected by the New York Times as “One of 2019’s coolest innovations.”

“It looks like a tablet that can be placed directly on the dashboard, and we use the windshield as the reflector. We also adapted the technology so that any car is able to display their favorite navigation app directly on the windshield,” said Duflot, adding that 50 percent of their customers for the car product are based in the U.S.

The French company Nanomakers designs, produces and sells industrial quantities of patented nanopowders based on silicon for the disruptive strengthening of industrial materials, in particular the anodes of Li-ion batteries.

“Our product is included in the anode, which is part of the cell of the battery. The battery can be used by a smartphone, a car, a drone, etc. Our direct customer is the anode maker. The anode is bought by the cell maker,” Jean-Francois Perrin, CEO and chairman of the board of Nanomakers, told Shenzhen Daily.

For the two-week tour, the company has around 20 appointments with different Chinese companies, including anode makers, cell makers and end users like the smartphone maker Huawei and carmaker BYD.

Perrin said that they wish to be part of the future of Shenzhen by bringing their nano silicon product, which can improve the energy density of the anode in lithium-ion battery, thus helping provide high-performance batteries that will allow taxis to drive longer without needing to be recharged.

French Tech Tour China is jointly organized by Business France and Bpifrance, a French public investment bank. It is an immersion program for French digital and energy transition companies. The tour this year lasts from Nov. 25 to Dec. 6, and after Shenzhen, the companies will go to Guangzhou, Hong Kong, Chengdu, Shanghai and Beijing.