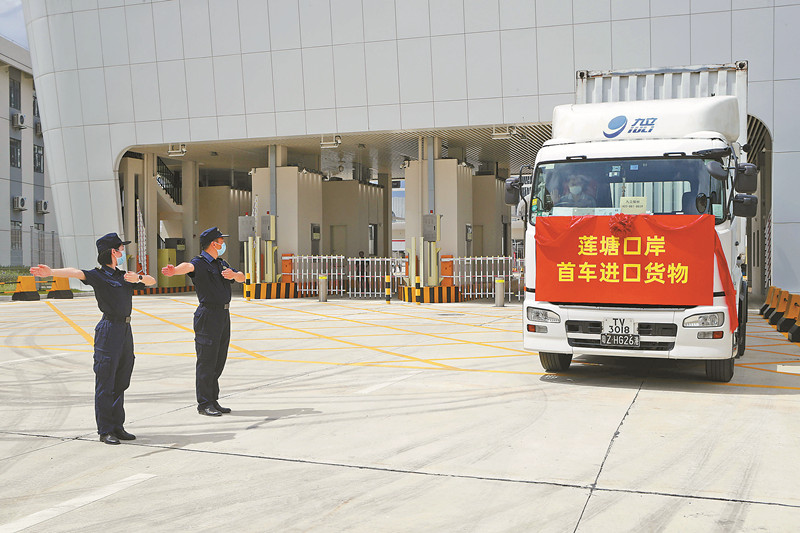 The cargo clearance facility of Liantang Checkpoint in Luohu District, the seventh land border-crossing facility between Shenzhen and Hong Kong, was put into use at 4 p.m. yesterday, the 40th anniversary of the Shenzhen Special Economic Zone.

Because of the COVID-19 pandemic, only cargo trucks are allowed to cross for the time being. The checkpoint is off-limits to private cars, coaches, hired cars and passengers. 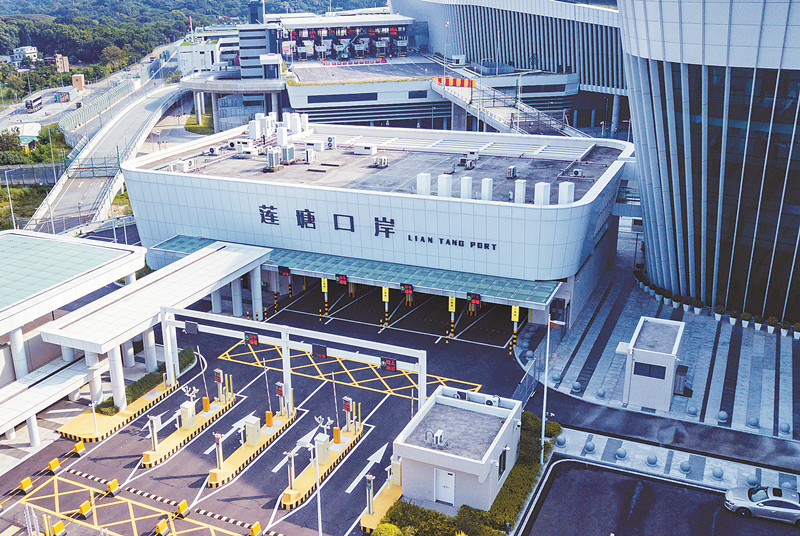 Lam said she was excited to see the commencement of the crossing, as the project was hammered out in 2008 when she was secretary for development. She said the Guangdong-Hong Kong-Macao Greater Bay Area plan had increased the value of the facility.

"In the past two years, two major cross-border infrastructure, the Hong Kong section of the Guangzhou-Shenzhen-Hong Kong Express Rail Link and the Hong Kong-Zhuhai-Macao Bridge, have commenced [operations]," Lam said.

"The travel time between the two places has been shortened, further improving the layout of the 'one-hour living circle' of Guangdong, Hong Kong and Macao."

Ma said the opening of the checkpoint is another major encouraging achievement of the cooperation between Hong Kong and Guangdong, and will boost personnel exchanges, logistics and trade between the two places.

Wang said the past 40 years have witnessed fruitful results in the cooperation between Shenzhen and Hong Kong, which he hoped will deepen now that the new checkpoint has opened.

The service time for cross-boundary goods vehicles is from 7 a.m. to 10 p.m. starting from today, a release by Shenzhen Customs said.

As a structure stradling the New Territories of Hong Kong and Luohu District in Shenzhen, the Liantang/Heung Yuen Wai Checkpoint is connected to the 11-kilometer toll-free Heung Yuen Wai Highway, which connects to Fanling Highway and was opened in May last year on the Hong Kong side. On the Shenzhen side, the checkpoint connects to Shenzhen Eastern Cross-border Expressway and Luosha Road.

This is the first land-based border crossing in Hong Kong with direct access facilities for both passengers and vehicles, and is designed to handle 17,850 vehicle trips and 30,000 passenger trips a day. The facility was designed so users could take public transport, private cars or walk through a pedestrian subway to reach the checkpoint for passenger clearance.

Before the new checkpoint opened, cross-border traffic from eastern Shenzhen to eastern New Territories of Hong Kong flowed through the Huanggang, Wenjindu and Shatoujiao checkpoints on the Shenzhen side.

The new checkpoint operates in the style of one-stop clearance for cargo vehicles and "two inspections in two places" for passengers.

"The completion of the facility marks the completion of the Shenzhen strategy of East for East Cargo, and West for West Cargo. It will be a new cargo logistics passage for the Guangdong-Hong Kong-Macao Greater Bay Area," said Li Huipeng, deputy head of Liantang Customs.

To improve the cargo clearance efficiency, Shenzhen Customs has adopted the latest technologies for traffic guidance, electronic fences, monitoring and remote sensing. All the inbound and outbound vehicles will be monitored on one platform and go through one-time parking, one-time inspection and one-time clearance. The monitoring facilities at the checkpoints can detect banned products without necessarily opening the containers for inspection.

The building for traveler inspections has been equipped with 5G technology. Shenzhen Customs will use facial recognition, big data analysis and electronic service in health declaration and infrared temperature checks in the process of traveler clearance.