When a lot of people were puzzled at Mark Zuckerberg’s decision to change his company’s name from Facebook to Meta last October, Shon Roman was not surprised at all.

He believes the metaverse, VR and AR represent the next frontier in technology and will be ubiquitous and part of our life in five to 10 years’ time.

“It may seem unbelievable,” said the tech savvy 24-year-old from Belarus. “But when you look at it, technology has grown at an accelerating speed. The first iPhone was released only 15 years ago and revolutionized the way how people communicate, have fun and live their lives in general.”

“Augmented reality (AR) augments your surroundings by adding digital elements to a live view, often by using the camera on a smartphone, while virtual reality (VR) is a completely immersive experience that replaces a real-life environment with a simulated one,” Shon said.

“You can create a complete simulation of the world. Therefore, you will be able to interact with the virtual world as with the real one. Here you can disable the laws of physics and create your own. This allows you to create countless scenarios for experiments.” 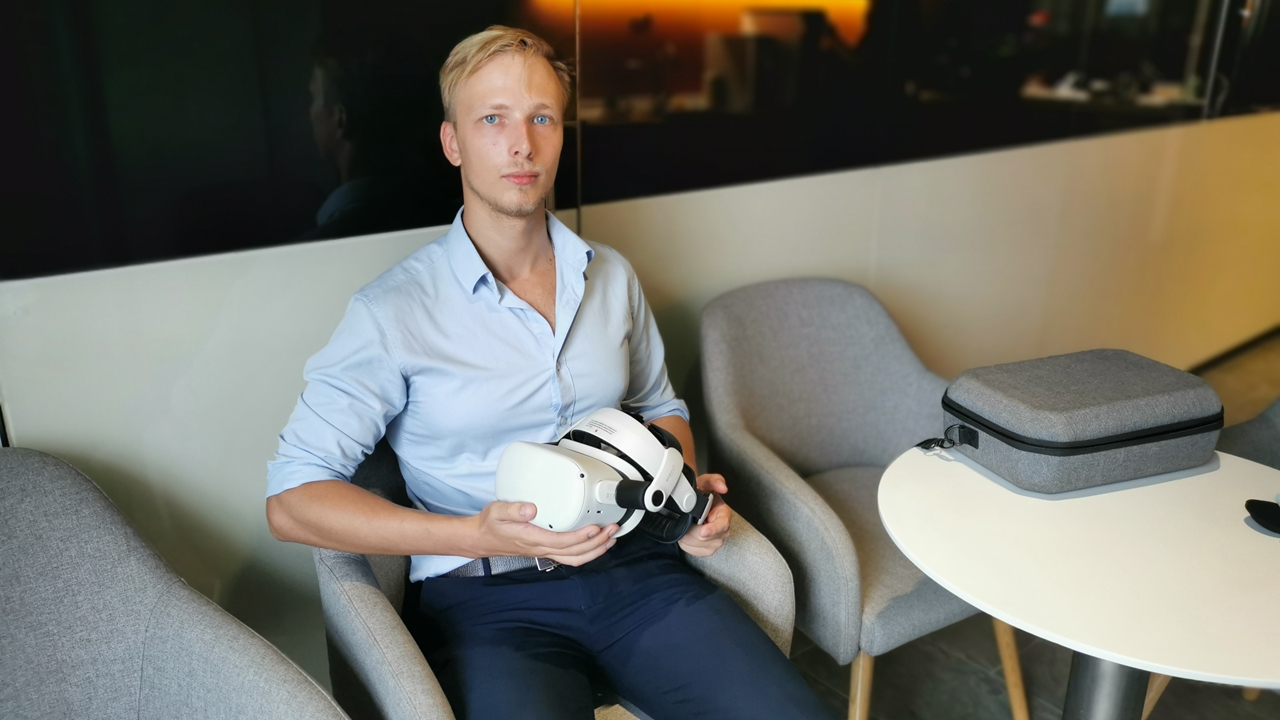 Shon Roman with a VR headset in his hands. Li Dan

Calling himself “local” in Shenzhen, Shon first came to China four years ago during the summer vacation of his sophomore year. A computer science student of the Belarusian National Technical University, he visited his elder brother who was teaching at an international school in Hefei, Anhui Province. They toured Shanghai and the neighboring Zhejiang, deeply impressed by the shiny high-rise buildings and ubiquitous tech applications people use in their daily lives.

“When my brother accepted a job in Shenzhen, I decided to come with him,” he said.

The closeness to the sea and the beautiful environment made him instantly fall in love with the city. “Even during a COVID lockdown, I didn’t feel any inconvenience here, because the logistics systems remained functioning,” he said.

After learning the basics of the Chinese language, Shon enrolled in a program at Shenzhen Polytechnic to learn about the applications of virtual reality.

When the 35 in his class graduated this July, he chose to stay in Shenzhen and start his own software company. “Most of my classmates found jobs with other tech companies, but four, including me, decided to start our own businesses. Currently, the application of VR technology is mostly for creating immersive experience in games, but I definitely believe it can also be applied in other scenarios,” he said.

One product his company has come up with is education software that will help children learn about plants and environmental protection. Putting on a VR headset installed with the software, a child can see and feel their hands in the vivid 3D environment of a garden, then use their hands to hold a tree branch, and follow instructions to use the tree branch to catch CO2. They can also pick up a jar to water the plant.

In addition to education and training, Shon sees the possibility of using VR technology in business and marketing. For example, a realtor can take his client to tour and experience the property without having to travel to the venue.

Shon met his business partner Anastassiya Voronova during a meet-up of tech savvy young people. Voronova is a young woman from Kazakhstan, had studied in an art school in her home country before learning computer science at the University of London and game development at Falmouth University.

Passionate about the future of technology, Shon said it’s exciting to be in this field because “we are creating things that no one has done before us.”