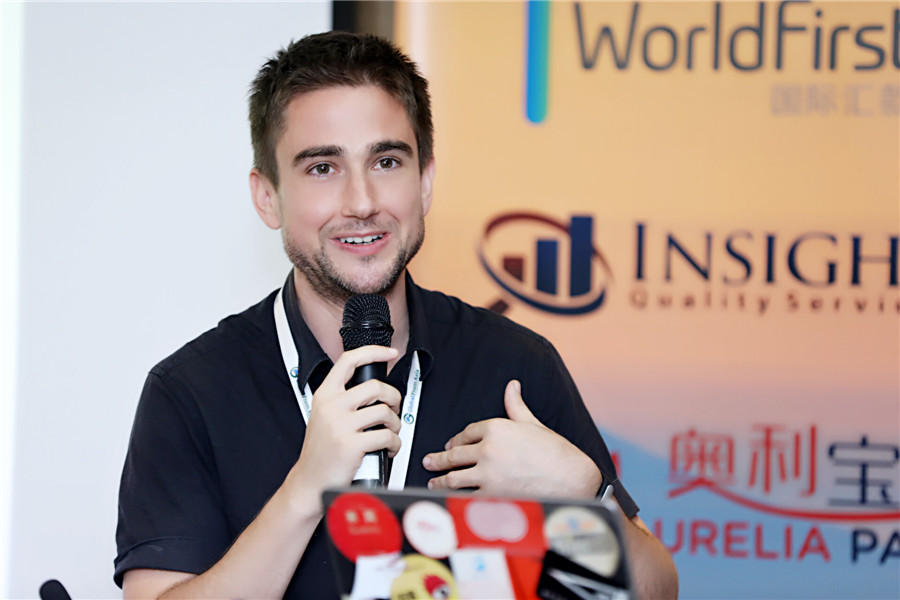 Working from his home in Futian District, Michael Michelini leads a routine life of biking to pick up his son from nursery school, singing the ABCs on the ride back and then working on content creation and Internet marketing in the afternoon.

Michelini is an American who founded and hosts a weekly podcast called Global From Asia to help businesses understand how to do business in Hong Kong, China and other parts of Asia. He is also a happily married father of two living in Shenzhen with his wife Wendy.

Global From Asia is an online platform for cross-border trading and business networking. It hosts regular expert meetups and workshops in China and has a growing network of meetups around the world that are organized by chapter leaders. Each year it hosts an annual conference, the Cross Border Summit in Shenzhen.

Michelini came to China in September 2007 to source from factories for his growing e-commerce business. As an up-and-coming entrepreneur it was too expensive for him to fly in and out of Shanghai or other Chinese mainland cities every 30 days for visa purposes. So he chose Shenzhen, where he could have the same benefits of living on the mainland, while still living close to Hong Kong, which makes doing business as well as managing his visa situation much easier.

At the time, he was working on the startup Social Agent, and was in the process of fundraising and team building. During the second day of the conference, one of the organizers, Dan Andrews, was encouraging everyone to start a podcast. He had been podcasting for years as Tropical MBA, and spoke of how it had changed his life and his business. He said there was a real need for a Hong Kong business podcast.

Andrews’ words immediately dispelled Michelini’s concerns and reticence. Flipping open his laptop, Michelini began to search for potential names for his podcast. He didn’t want the name to only contain Hong Kong, as the podcast would also deal with other parts of Asia. He also didn’t want it to only be about doing business in Asia, but rather globally. Then it hit him — Global From Asia — and luckily the name was available.

Michelini registered the domain, and put up a simple landing page. Immediately he tweeted out that he was taking Andrews’s advice and was launching a Hong Kong business podcast.

The initial site was simple, a one page site with the Hong Kong skyline and an email subscription box. Immediately people began to sign up, and the pressure was on.

Gary Lam, a good friend of Michelini, had serendipitously given him a professional microphone, so luckily for him he was already partially prepared to begin recording. Within a week he had recorded the first episode of his soon-to- be burgeoning podcast.

It was a struggle for Michelini to start podcasting while also working on Social Agent, but he thought it would be a good way for him to connect with other Asian-based business owners and help people at the same time.

The key to the podcast was that Michelini had to keep it going weekly. “Starting something is always pretty straight forward and easy, but how to keep it going is the real challenge. A weekly show needs comprehensive preparation and requires the process of finding guests, editing audio files, creating the website post and promoting the show, etc. Many times it was Sunday night or even Monday and I was rushing to get the editing done,” he said.

Besides busy preparation for the podcast, Michelini said that one of his biggest struggles was dealing with a fear of the unknown.

“It is acting and doing something that you believe works when many others may not see your vision. I need to invest time and money in buying products from a factory, or hiring staff, with the risk of it not being able to be sold later,” he said.

Michelini said, “I love making content and helping people. But it was getting to be more and more money invested with no return. You are making this content, pushing it out into the Internet, to the rest of the world and often times you have no idea if people are listening or even like it!”

Luckily, sometimes the 5-star reviews on iTunes let him know that things are going well, and the occasional nice email from a listener who enjoys the show also encourages him.

Doug Miller, an American from the Midwest, had been sourcing from China for over a decade. After listening to Global From Asia, he decided to take the leap and he opened a business here in Asia. He is now receiving commission from various distribution partners in South East Asia, along with being able to source from China cheaper than he ever could before. How? He learned that he could send Chinese yuan to the factory directly instead of U.S. dollars. This saves him money on the exchange rate, and the factories prefer it as it reduces currency risk for them.

“David Zhang is a product designer in Dongguan, China. He wanted to launch his product in the U.S. market but didn’t have any distributors. Jimi in New Jersey was looking for new products and partners to do business with in the U.S. market. He had the marketing skills but wanted a quality and unique product. We brought them together and now years later, they are still working together,” Michelini recalled.

This April, with 200 attendees from 32 countries around the world visiting the Pearl River Delta area for the trade show season, the team at Global From Asia completed its second annual conference Cross Border Summit in Shenzhen.

“What started as a podcast has grown to guide books, training classes and premiere events. After the Cross Border Summit, we launched a private membership club where members could connect with one another and help each other with their businesses,” Michelini said.

For Michelini, growth is the goal and the third annual Cross Border Summit is already scheduled for April 20-21, 2018 right here in Shenzhen.

Michelini and his wife feel Shenzhen is a great place. “While of course many of my American friends get married and then bring their wife and kids back to America, we plan to stay here in Shenzhen to raise our children,” he said.

They have a son, Miles, who just turned 3 years old and a daughter, Maggie, who is a year and a half. Michelini said: “The general rule on weekends is daddy gets a few hours in the morning to do his writing and website development work, and then lunch and the rest of the day we go out and play, either on bikes, taking a walk, or going to those massive indoor playgrounds at a local mall.”

The whole family often rides bikes together, two bikes with two baby seats, along the Shenzhen Greenway between Futian and Nanshan.

“I’m so glad Shenzhen was created a little over 30 years ago and there are opportunities here that help to bridge China and the rest of the world. While my business is called ‘Global From Asia,’ it could also be focused down to ‘Global from Shenzhen,’ as Shenzhen is growing up more and more to be a truly global metropolis. I’m proud to be a part of it,” Michelini said.