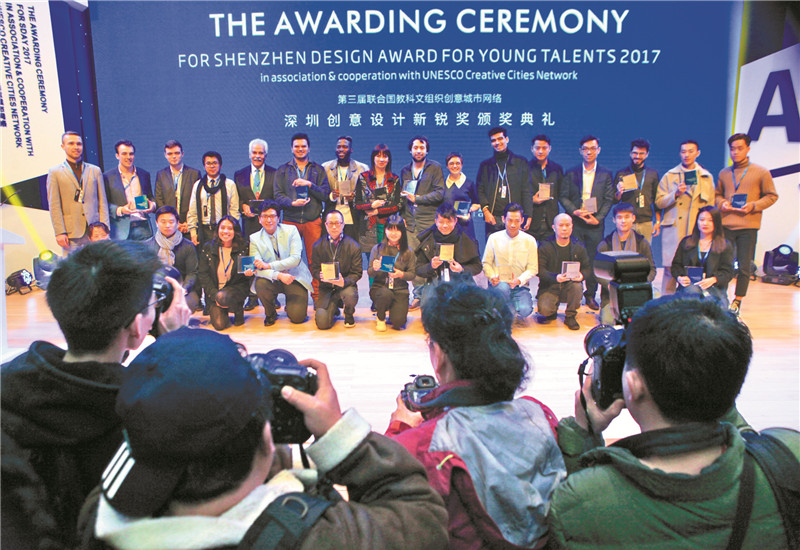 Winners of the Third Shenzhen Design Award for Young Talents (SDAY) were awarded at the Sea World Culture and Arts Center during an awards ceremony held yesterday afternoon.

Italian designer Fabrizio Alessio stood out from over 260 contestants and won the Grand Award along with a prize of US$20,000 with his design of an open-source wheelchair project called TooWheels.

“I’m very excited and it’s really emotional for me to win this important prize because Shenzhen is one of the most important innovation centers in the world,” said Alessio during an interview with the Shenzhen Daily after the ceremony.

TooWheels is a project that enables people with disabilities to make their own wheelchairs anywhere in the world with local materials.

Users can download files and instructions for the construction online, customize a wheelchair for themselves and make the wheelchair at home or using digital fabrication equipment if they are close to a FabLab.

Compared with buying a wheelchair, the project provides users the option to make a customized wheelchair at one-10th of the cost.

According to Alessio, a designer is someone who can use his creativity to improve the quality of people’s lives. Alessio said that as a volunteer, he knows a lot of disabled people and can see that they face many challenges.

“Designers, maker culture, open sources and digital fabrication tools can be something that I discovered can help people with disabilities. So I decided to create this project,” he said.

In Alessio’s opinion, the design industry in Shenzhen is growing rapidly and he hopes the award can be the beginning of exchanges between him and Shenzhen.

“I’m sure that as for product designers there are a lot of possibilities in Shenzhen and in China’s design movement,” he said, adding that he is looking forward to developing future collaborations with factories and designers in Shenzhen.

Ten designers and design teams from France, the United States and China were offered the Merit Award. Each of them received a prize of US$5,000.

Ten students and student teams from Mexico, France, the United Kingdom and China won the New Star Award. Each of them was awarded US$3,000.

A free exhibition showcasing the winning design works is being held at the Museum of Contemporary Art and Planning Exhibition in Futian District until Feb. 23.

Organized by the Shenzhen City of Design Promotion Association, SDAY is a biennial award first launched in 2013 with the aim of rewarding young and talented designers below 35 years of age from cities named under the UNESCO Creative Cities Network (UCCN).