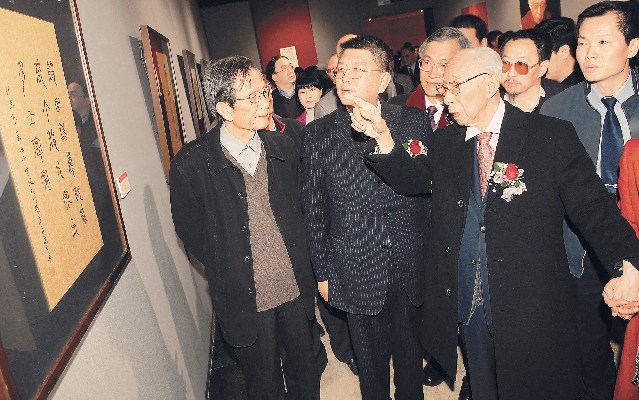 “He was a real scholar, a master of guqin, chess, calligraphy and painting. Jao even penned his diary entries in the form of classical poems,” added Yin.

In 2001, Yin went to Hong Kong to invite Jao to deliver a speech for the launch of the Shenzhen Reading Forum, an important event during Shenzhen Reading Month, which Jao accepted happily. “Jao really liked this young city where people love reading. He was a rigorous scholar, though not very talkative. But when talking about Shenzhen, he didn’t hide his praise,” said Yin.

In the eyes of Jao, Shenzhen is a young city where reading is highly appreciated and a place full of hope for the future.

“Professor Jao had a deep academic relationship with Shenzhen which dated back to the 1980s,” said Jing Haifeng, head of the School of Humanities of Shenzhen University.

“He was invited to speak at a sinology seminar jointly organized by Shenzhen University and a committee of State Education Commission colleges and universities about ancient book editing, giving lectures to young teachers from different universities countrywide who were working on literature, history and ancient books editing,” recalled Jing.

Jing first learned about Jao as early as in the 1980s when Jao was already famous in the country’s literature and history fields. After coming to Shenzhen University for work in the 1980s, Jing met and communicated with Jao on different academic occasions.

“Jao was a very active thinker and well-informed about cutting-edge academic advancements. He was very energetic and productive even at an old age. He never stopped his academic work and created a great number of works even at the ages of 80 or 90,” said Jing.

For Jing, what impressed him most was Jao’s persistence and resilience throughout his academic life. “It was not merely sudden enthusiasm that only lasted for a short time. It was persistence. He made it part of his life.”

In the late autumn of 2011, 96-year-old Jao wrote down four Chinese characters — “Ren Wen Tian Di,” meaning “paradise of humanity” — on behalf of the Shenzhen Special Zone Daily. On Dec. 7, 2011, the four characters were published as their masthead and is still in use today.

On the afternoon of Dec. 14, 2011, Chen Yin, then editor-in-chief of Shenzhen Special Zone Daily, went to Hong Kong to visit Jao to congratulate him on his new post as president of Xi Ling Seal Club, thanking him for the inscription of the masthead, and consulting him on issues regarding running a newspaper and pursuing one’s studies.

The Daily Sunshine has also published several special reports on Jao, showing his concern about the public cultural undertakings of Shenzhen.