The nationally well-known painter, Liu Yuyi, famous for his oil paintings portraying China’s major historical events, such as the country’s founding ceremony, will work with Shenzhen University to set up an arts research center in 2018. An exhibition of Liu’s 132 paintings was launched at the university yesterday morning. 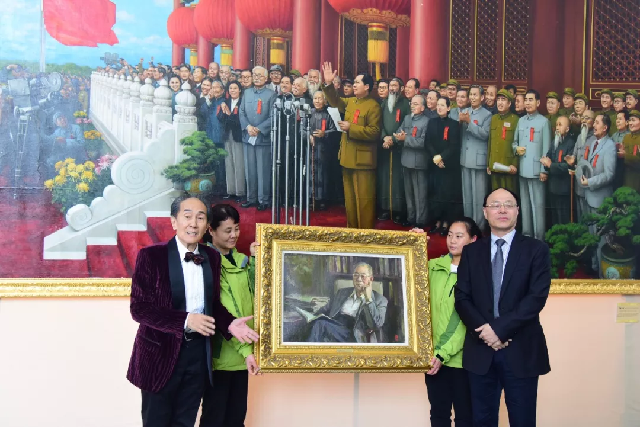 Liu was a member of the national Chinese People’s Political Consultative Conference and is an honorary chairman of the Association of Chinese Culture of Hong Kong thanks to his contributions to art in recording the country’s key events in oil paintings.

Liu was born in Nanjing, capital city of Jiangsu Province, in 1940. Over the past few decades, his epic paintings have been collected and exhibited at many key political venues in Beijing, such as the Great Hall of the People, the Tiananmen Rostrum and the Chairman Mao Memorial Hall.

The painter has also established and is chairing a research center of the arts at Beijing Normal University.

The exhibition inaugurated yesterday was curated by the city’s publicity department and Shenzhen University to review the country’s major achievements and evoke people’s memories of the past decades.

“It’s such a special honor for our university to hold the exhibition and to have the arts research center established here,” said Liu Hongyi, Party chief of Shenzhen University.

He said that 2018 marks the 40th anniversary of China’s economic reform and opening up.

Over the past decades, the painter has set four world records for the price of a Chinese art work and he has also been praised as the “chief painter of the PRC.”

After the inauguration ceremony, Liu Yuyi presented two of his paintings to the university as gifts. One of the oil paintings is a portrait of Professor Zhang Wei, the first president of Shenzhen University. The other gift is an oil painting featuring the Chinese Dream.

Liu Yuyi also granted letters of appointment yesterday to a group of committee members who will give professional advice on setting up the arts research center. Chen Yin, president and Party chief of Shenzhen Press Group, has been appointed as one of the committee members.