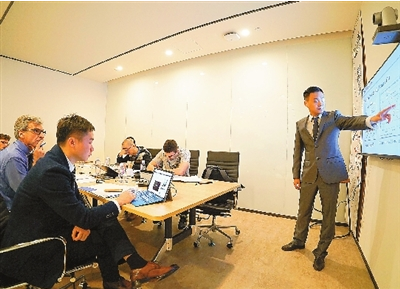 Li Cong, one of the five finalists in the fourth edition of the France Alumni China Entrepreneurship Award, presents a road show on his “Serum ctDNA kit for early cancer screening” project at Ali Center in Nanshan District on Dec. 4. Courtesy of Campus France China

Li Gong, one of the five finalists in the fourth edition of the France Alumni China Entrepreneurship Award, which was organized by the French Embassy, is the founder of a startup company in Shenzhen that is focused on the “Serum ctDNA kit for early cancer screening” project.

As a postdoctorate researcher from the Centre International de Recherche sur le Cancer, France and a Ph.D. in medical genetics from the Human Genome Research Center of Huazhong University of Science and Technology, Li gave up a stable and promising job at the university to start Prognosis Gene with his partners in September 2016.

“I had been thinking about setting up a company focused on our project since I was back in France, because there is a market for it. We found that we enjoyed some advantages compared with other companies in the field of early cancer screening. Our advantages consist of lower costs, faster diagnoses and higher accuracy.”

Liquid biopsy, also known as fluid biopsy, is the sampling and analysis of nonsolid biological tissue, primarily blood. Like traditional biopsy, this technique is mainly used as a diagnostic and monitoring tool for diseases such as cancer, with the added benefit of being largely noninvasive.

“Every cancer patient needs to undergo a biopsy at the hospital, which is the extraction of sample cells or tissues for examination under the microscope to diagnose cancer. We have found that liquid biopsy has many incomparable advantages,” explained Li.

According to Li, liquid biopsy is more comprehensive since it examines cancer cells that randomly fall into the circulating blood, while a traditional biopsy only extracts a small cancer sample, which fails to reflect the overall situation.

The second advantage of liquid biopsy lies in its noninvasiveness. Traditional biopsy with puncture causes more pain and cannot be done frequently. “For liquid biopsy, they just need to draw your blood once every month or two depending on the clinician’s decision, which is really helpful. They can examine it to see whether there is relapse as you recover by taking medicine,” explained Li.

“Our liquid biopsy is based on circulating tumor DNA (ctDNA), which means we extract DNA in the peripheral blood and analyze it using bioinformatics. Our core technology is being able to examine ctDNA even when it’s a very small amount, allowing us to detect early-stage cancer,” said Li.

The company’s current goal is to integrate their technology to make a kit for early cancer screening. “We cannot ask all of the doctors at the hospital to come to us for training. So we want to package it in a detection kit that includes all the reagents and instructions,” said Li, adding that they are now in the process of applying for the patent.

For Li, Shenzhen is the best place for startup companies. “First of all, it’s easy to get angel investment. There are many angel investors in Shenzhen, I think more than in Beijing or Shanghai. The city is really generous and daring. It’s willing to invest in micro and small enterprises, for which I always feel grateful. If you asked me 10 times to choose again, I would still choose Shenzhen.”