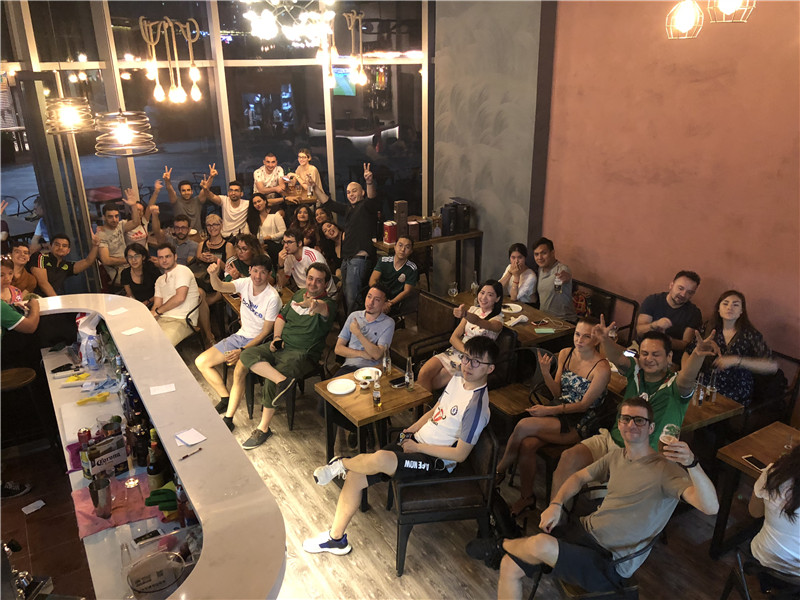 Hundreds of Mexicans in Shenzhen gathered at Mexican bars and restaurants across the city to cheer on their team in a surprise 1-0 win in their 2018 World Cup match against Germany on Sunday night.

Video of the people watching the game and singing "Cielito Lindo," a song very characteristic of Mexico, at Mexican restaurant Bésame Mucho. Courtesy of Kyler Kwong

“What happened yesterday? Mexico surprised the whole world,” said Christian Saldana Cruz, who is the owner of the Mexican restaurant Bésame Mucho in Nanshan District, where around 60 Mexicans watched the match. 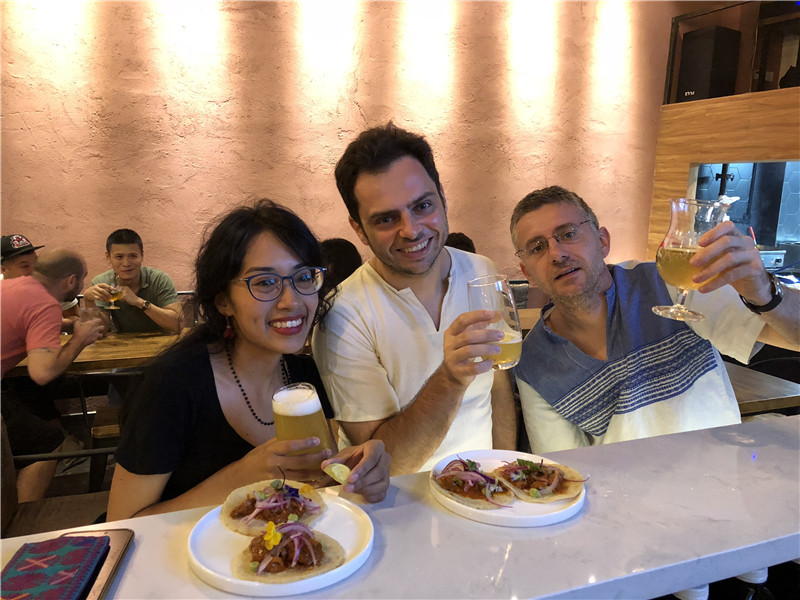 (From L to R) Olga (from Mexico), Stefan (from Romania) and Milos (from Serbia) watch the game at Mexican restaurant Bésame Mucho. Courtesy of Kyler Kwong

“Mexico plays against the odds. So most people, even including the Mexicans around the world, believed Germany might crush Mexico. But our national team gave us the best surprise ever,” he said.

“Germany is one of the most difficult teams ever, so everyone at Bésame Mucho ended up nervous, because we don’t want to be disappointed, but once again Mexico sweated the shirt, played with heart and gave us the most exciting surprise ever,” said Saldana.

Francisco Javier Silva Elias, manager of customer service at Globex Asia and president of the Network of Mexicans China Chapter, was one of the Mexicans watching the game at Bésame Mucho.

“We knew Germany is famous as a big fierce opponent — they won the last World Cup — and in their first game of last four World Cups they crushed the opponents. So expectations were low, hope was very thin among the crowd. It was more of, ‘I am here to support and hopefully see a good match,’” said Silva.

“And oh boy, we did watch a great match! Mexico was pushing since the first five minutes of the game. After many tries, towards the end of the first half, the impossible, the first goal of the match ... from Mexico! All the Mexicans jumped from their place,” said Silva, still excited from the game.

“It was our first match in this World Cup, and it is just the beginning of the World Cup ... but for Mexicans last night, that game was like if we already won the World Cup!” Silva said.

“It’s a great step for our country because Germany is a difficult rival. It’s something nobody expected. Now in the media in Mexico they only talk about the match, nothing is more important, not even politics. The election of our new president is very near, but in front of the news that Mexico won over Germany, that was not so important,” said Monter.

Neto Trevino, manager of the Mexican restaurant Tequila Coyote’s, said around 200 people watched the match at the restaurant, 80 percent of whom were Mexicans with only two Germans.

“We made history. I am happy to live that moment in our place surrounded by our people. One voice, one cheer. Did you know that an earthquake was registered in Mexico after the goal?” said Trevino.

“Mexico is the strongest of the other three teams in the group, and South American teams are known to be tough. I was a bit worried about the game, though I would not have thought Germany would lose it,” said Pfitzner.

“I still believe Germany will make it to the next round. So far, only Spain and Portugal have shown their potential, so it promises to be an interesting World Cup with a lot of surprises,” said Pfitzner.

Hirving Lozano scoring the lone goal in Mexico’s 1-0 victory over reigning World Cup champion Germany appears to have led to an artificial earthquake in Mexico City on Sunday.

Two monitoring stations in Mexico City picked up the temblor the same time Lozano scored, 35 minutes into the match. Seismologists in Chile also said that their instruments detected an artificial temblor at the same time.

John E. Vidale, director of the Southern California Earthquake Center, told USA Today Sports that at most such fan-induced earthquakes would generate a 2 on the Richter Scale, which would go unnoticed by the public if it were a typical quake.

Induced seismic activity has been measured from everything from nuclear testing to fracking.

Vidale studied the seismic activity around Seattle’s Century Link Field earlier in the decade after the “beast quake,” created by fans celebrating a Marshawn Lynch touchdown run during a playoff game in January 2011.

“It was mostly for fun,” Vidale said. “It made us look at the instruments, since measuring these signals are often too small to distinguish. It’s very hard to analyze.”

Looking at the footage from the celebrations in Mexico City on Sunday, it’s easy to see how the ground could have shaken.

Fans crammed into the Zocalo, the city’s main square, to celebrate.

“What happened today was an earthquake of joy for us — just imagine, we beat the world champion!” said Laura Villegas, a 45-year-old merchant who downed her beer with tequila in one gulp.

President Enrique Pena Nieto joined the party, saying on Twitter: “Confirmed: Mexico competes and wins against the best in the world, Congratulations to @miseleccionmx! Great match!”

Throughout the capital, the streets filled with exhilarated fans, on foot, bicycles, motorbikes or in cars. Some blasted their car stereos, while others shrieked in glee.

Some Mexican soccer fans took great pride in the reports of their cheering causing an earthquake, according to Newsweek.

“There was an artificial earthquake in Mexico City caused by the celebration of Mexico’s goal and if that doesn’t tell you how passionate Mexican fans are then i don’t know what will.”