Note: The following is an edited translation of a commentary from the Chinese-language "Commentaries on International Affairs."

U.S. President Donald Trump has met with Chinese President Xi Jinping’s special envoy and Vice Premier Liu He who is leading the Chinese delegation at the seventh round of trade consultations in Washington D.C. Trump said that a lot of progress had been made, while much remained to be done, and that the two sides had decided to extend the talks by two days. 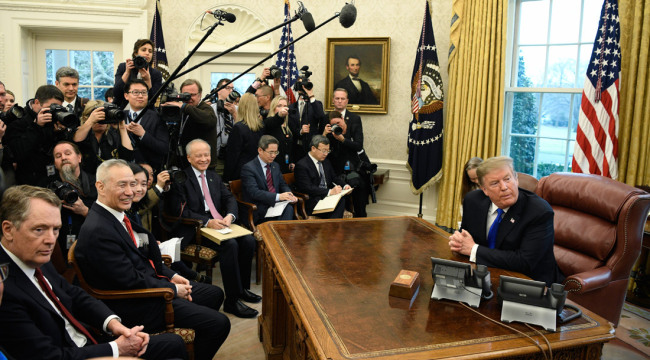 This is the first time that China and the U.S. have extended their high-level economic and trade consultations since last February. It shows that the trade talks, while making progress, are entering the “final sprint”, or the most crucial and toughest stage. It also shows that the two teams have begun working an “extra shift” to speed up their work, in order to implement the important consensus reached between the two heads of state.

As an ancient Chinese saying goes, “Ninety miles is only half of a hundred-mile journey,” meaning the last part of a task is often the hardest to complete. Since China-U.S. trade talks kicked off a year ago, they have seen many ups and downs. But during the sixth round of talks in Beijing last week, guided by the consensus between the two presidents, the delegations reached agreement in principle on major issues and held discussions on a memorandum of understanding which in turn pushed forward the talks into the stage of drafting the text of a deal. During the ongoing seventh round of “fruitful” talks, the two sides made progress in terms of trade balance, agriculture, technology transfer, intellectual property protection and financial services.

However, it will still be quite difficult to finalize all the details and translate them into text. To safeguard their own national interests, the two teams are bound to deliberate all the subjects carefully and weigh every word of the specific expressions. Exchanges and even a see-sawing between the two sides are also inevitable. As such, the extension of the talks makes it possible for the two delegations to communicate more deeply and conduct more thorough and mature considerations to their respective concerns. This will be conducive to the two sides hatching a deal and translating it into practice in the future.

The extension also shows that both China and the U.S. are willing to reach agreement at the talks which have been underway since the trade dispute broke out last February, especially since the two presidents met in Argentina last December and brought the escalation in trade frictions to a halt.

The U.S. Congressional Budget Office recently said that if the tariffs imposed by the United States remain at current levels, average annual GDP growth over the next 10 years will be dragged down by 0.1 percentage points. China also admitted that exterior influences including Sino-American trade frictions have been exerting more downward pressure on its economy. Meanwhile, several international organizations have lowered their global economic growth expectations. Nobel Prize-winning economist Paul R. Krugman even warned of global economic recession for later this year or early next year. Stock markets around the world have seen a bullish trend since China and the US strengthened their trade talks last December. The correlation between soaring stock markets and the progress of the trade talks shows that the capital market is expecting the two countries to solve their trade issues.

In less than a month, three rounds of high-level consultations have been held in quick succession, each taking longer periods of time. This shows the two sides are multiplying their efforts, confident that they can make things work based on the consensus reached between President Xi and President Trump.

As the two biggest economies in the world, China and the United States have very complicated trade issues to solve, and the difficulty in doing it within 90 days cannot be underestimated. However, the two sides are resolved to hold on until they come to the end of the tunnel. They are continuing the talks through the weekend. In his message to President Trump, President Xi said that he hoped the two sides would continue to work hard to reach a mutually beneficial, win-win agreement. President Trump added that he believes “there's a very good chance” that the two sides will strike a deal “that's going to be good for both countries.” He also said that he looks forward to meeting with President Xi Jinping again in the near future. These positive remarks will undoubtedly motivate the two teams even more as they race against time during the final sprint.

Admittedly, on account of the enormous differences in their respective domestic conditions, social systems, cultural traditions, China is well aware of and prepared for the complexity of trade frictions and the time it needs to solve them. No matter how the trade consultations turn out, China will keep on deepening its reform and expanding its opening-up in order to achieve high-quality economic growth. After all, “Do your own business well” is the most valuable experience China has drawn from its 40 years of reform and opening-up program; it is also a strong shield that can help protect China from all the winds and storms blowing from the outside.