China and the U.S. need to further expand common interests

Note: The following is an edited translation of an article from the Chinese-language "Commentaries on International Affairs."

The latest round of China-US high-level economic and trade talks closed on Sunday in Washington, DC. After the talks were extended through the weekend, the two sides have made progress on a number of areas, including technology transfers, intellectual property right protection, non-tariff barriers, the service industry, agriculture and exchange rates. At the same time, US President Donald Trump has announced he will be delaying U.S. tariff increases on Chinese imports, which had been scheduled to take effect on March 1. 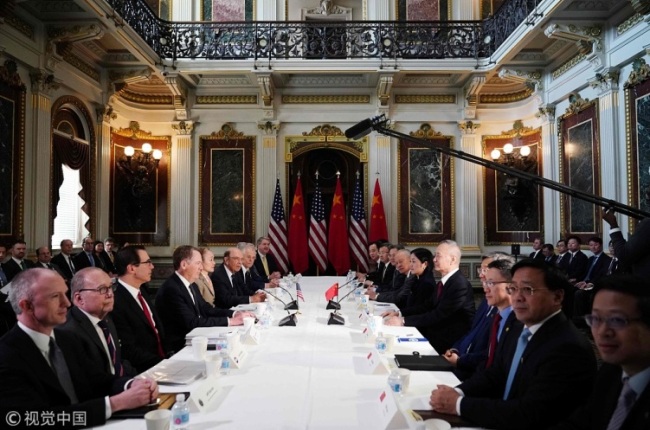 The seventh round of China-US high-level economic and trade consultations is held in Washington DC from February 21st to 24th, 2019. [Photo: VCG]

This round of talks has been promising. It furthers the agreements which had been reached during the last round in Beijing. From principled consensus to substantive progress, from consultations on specific issues to negotiations on the text of a possible agreement, the trade talks are getting down to the finer details, and are closer to the goals laid out by President Xi Jinping and President Trump during their meeting in Argentina last December.

The progress made in the Washington talks shows the two countries are finding an intersection of interests. From the Chinese side, by working toward narrowing the trade imbalance, China intends to import more agricultural products, energy and services from the United States. The move not only bridges the trade gap, but also gives Chinese consumers more options.

The import of more agricultural products from the U.S. is one of the key areas. The "No. 1 Document" issued by the Central Committee of the Communist Party of China and the State Council last week emphasized that while ensuring food security, authorities intend to expand more niche agricultural products as a way to diversify imports. But authorities also intend to expand critical agricultural imports. Soybeans are always in shortage in China and about 90 percent of them are imported from abroad. Expanding imports from the United States is critical in satisfying domestic demand and maintaining reasonable market prices. For the United States, the Chinese market - which accounts for 57 percent of its soybean exports - is irreplaceable. This is a prime example of how both sides can help one another. The start of the trade frictions last year put this symbiotic trade relationship under threat.

When it comes to the structural problems which exist in Sino-US economics and trade, most of what the U.S. side has been complaining about - except for areas of Chinese national security - also fit with Chinese goals of high quality growth and further opening-up. One area where this rings true is the protection of intellectual property rights. China and the U.S. are the two largest economies, and are home to some of the world's most innovative companies. As such, both sides have a mutual interest in protecting IPR. This is how issues surrounding IPR protection have been sorted out during the current round of talks.

International trade talks are an in-depth and complicated process. The closer China and the U.S. come to hammering through to a deal, the more cautious the two sides are likely to be. This is reflected in the two sides agreeing to expand their trade negotiations in Washington last week into the weekend. The extended talks are a likely indication of negotiators getting down to the finer details of the agreement, where points of language are likely being sorted out. At this point in the talks, it makes sense for the Trump administration to back away from tariff threats and give both sides a chance to conclude - what will likely end up being - a win-win deal.

In this round of talks, the two delegations took direct direction from their respective heads of state. This shows how deeply both Xi Jinping and Donald Trump care about making a deal, and recognize the importance of their trade relationship to one another.

As the two sides head down the final stretch toward a deal, it's expected both sides will continue coming into the talks with sincerity. And as these negotiations continue, China will continue down its path of reform and opening up to deal with external uncertainties.