Line 3 or 4 to Children’s Palace Station (少年宫站), Exit A

Nick Brooke Ltd. from Britain will present children’s play “The Tiger Who Came to Tea” on Oct. 19.

The doorbell rings just as Sophie and her mummy are sitting down for tea. Who could it possibly be? What they certainly don’t expect to see at the door is a big tiger! For the first time ever, this much-loved tale of a tiger creating tea time mayhem is brought vividly to life on stage in a show packed with oodles of magic, songs and clumsy chaos.

Based on the picture book written and illustrated by Judith Kerr, the show was adapted for the stage with songs and lyrics by David Wood. His many successes include “Fantastic Mr. Fox,” “The Gingerbread Man,” “BFG,” “The Witches,” “Meg and Mog,” “Spot” and “Babe the Sheep Pig.” 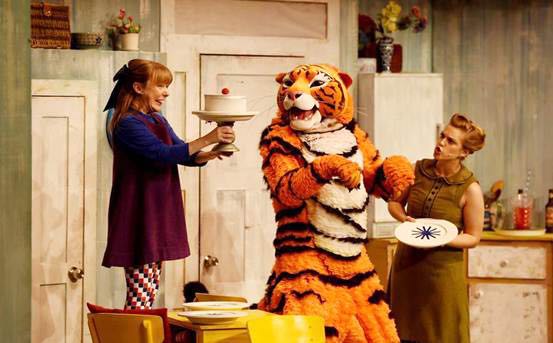 A scene from “The Tiger Who Came to Tea.”

Nick Brooke Ltd. is a West End-based entertainment production company, specializing in drama, cabaret, musicals and children’s plays. Since its formation in 2002 by Nick Brooke and Philip Noel, the company has produced over 60 shows, ranging from major adaptations of Rosamund Pilcher’s “The Shell Seekers” and Joanna Trollope’s “Marrying the Mistress” to revivals of such classic plays as “Corpse,” “84 Charing Cross Road” “Art,” “Arsenic and Old Lace,” “Strangers on a Train,” “Bedroom Farce,” “Hobson’s Choice” and “Private Lives.”

In 2008, the company produced its first season of “The Tiger Who Came to Tea” in London, which has been performed across Britain, Singapore, Australia and China. In 2011, the production was nominated for a Best Entertainment Olivier Award.

Metro: Line 3 or 4 to Children’s Palace Station (少年宫站), Exit A