An hour before kicking off his commented recital Sunday night, 59-year-old Olivier De Spiegeleir took a satisfied look at the grand piano he was to play on and practiced random melodies on the keys in a spontaneous fashion.

“I’m looking forward to playing on it,” he said. As a certain class of solo pianists do, the French-speaking Belgian spent the time before the concert with the piano, just like getting acquainted with it like a new friend.

His recital, which was held at the Mountain View Theater of the Sea World Culture and Arts Center, highlighted specific manifestations of joy in a nine-chapter repertoire featuring compositions from Baroque music to romanticism, composers from Beethoven to Bach, and poets from Schiller to Rimbaud.

“The recital features composers and poets who have outstanding artistic interpretations on joy. I put Chopin in the chapter ‘Joy of Dance’ as he was well-known for his waltzes. Also, when you hear Schubert’s musical moments in the ‘Inner Joy’ chapter, you can feel his sentimental smiles in tears,” said the pianist. 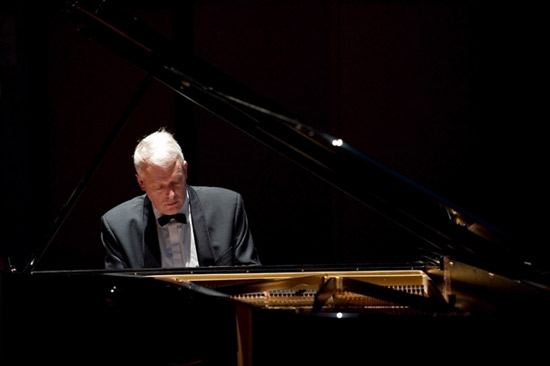 However, he told the Shenzhen Daily that more intertwined emotions rather than merely joy are expressed in the poems. “Not so many poems tell the very story of joy. The poems I’ve chosen to recite are rich in emotions and are supposed to be impressive enough for the audience to better understand the music to be played,” said Spiegeleir.

Spiegeleir played Liszt’s piano transcription of Beethoven’s “Ode to Joy,” which was the prelude of the last chapter of “Symphony No. 9” and the official anthem of the European Union. He saw the same fraternal joy in the composition as Schiller indicated in his poem “Ode an die Freude” — “All people become brothers, where your gentle wing abides.”

The pianist saw the chapter “Joy of Fairyland” as a section that may make one think of elves and Harry Potter, in which French poet Serge Langlet described a jubilant scene at the heavenly land of Hyperborea in the company of Mendelssohn’s fairytale capriccioso.

As few pianists may comment on music during a performance, Spiegeleir enjoys maintaining living contact with the audience by telling stories and sharing his own feelings. “I’m not lecturing the audience as a musicologist. The recital is like a personal approach for me to share with the audience the connections between language, music and culture,” he said.

The pianist played “Jasmine,” a folk song from Jiangsu Province of eastern China, as an encore. He has been to China six times.

A first-prize winner of the Dexia Classics Contest, Spiegeleir has recorded seven albums and given some 500 recitals across the world so far.

He has staged the complete repertoire of Beethoven’s 32 piano sonatas multiple times. The recital was also held to mark the coming of the year 2020, which will be the 250th anniversary of Beethoven’s birth.

“Beethoven has been my preferred composer. Playing his music always offers new connections between the musician and myself, especially in concerts: Every time a new stage, new piano and new audience. I cherish every concert as a part of my life,” he said.

As many in the audience are families with children, Spiegeleir offered tips on how to become a better piano hobbyist: “Now I’m 59, but my technique is improving. I can clearly feel that my left hand has been able to play better than 10 years ago. In order to play nice music, sure, you need to play technically, but you also need to understand the composer.”