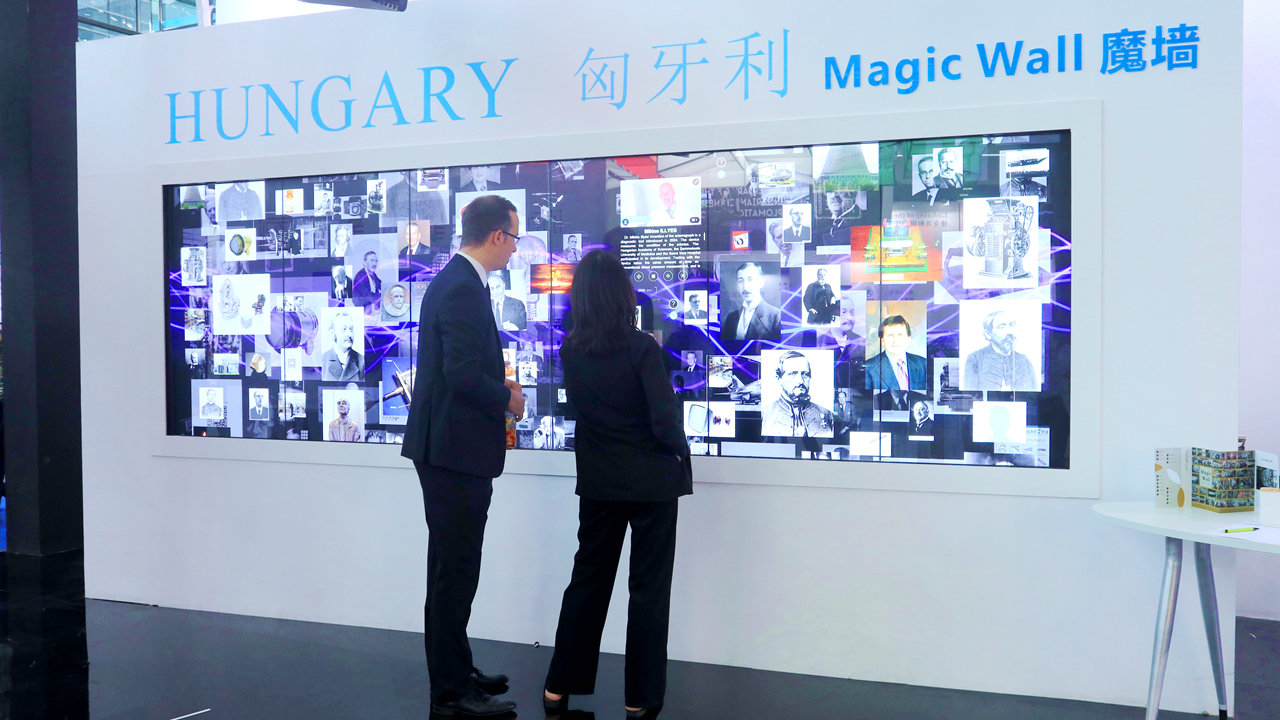 An exhibitor with the National Pavilion of Hungary introduces the "magic wall" installation to a visitor.Yang Mei

In celebration of the 70th anniversary of Chinese-Hungarian diplomatic relations, Hungary is sending its largest delegation to the ongoing 21st China Hi-Tech Fair (CHTF) in Shenzhen to showcase the central European country’s latest technologies and research projects.

Dr. László Palkovics, Hungarian minister of innovation and technology who leads the delegation, told the Shenzhen Daily in an interview that another main reason for Hungary’s special commitment to the event is that the CHTF is an important part of the broad areas of cooperation between China and Hungary.

“In addition to the bilateral exchanges between the company and government levels, the fair offers ordinary Chinese visitors a great opportunity to learn more about Hungary’s culture and its cutting-edge technologies,” Palkovics said, adding that the ministry is helping innovative Hungarian entrepreneurs, researchers and other professionals attend the fair.

The National Pavilion of Hungary is numbered 1A86 in Hall 1 at Shenzhen Convention and Exhibition Center, and this year’s theme is “A Continuum Between Virtual and Real.”

Seven exhibitors, including companies and a university, are displaying their hi-tech products and projects. One of them is called “magic wall” developed by Back & Rosta, a pioneer of cultural digitalization and intelligent museum solutions. By simply touching the pictures on the “magic wall,” you can learn everything you want to know about Hungary.

According to Dr. Palkovics, over the past 10 years the cooperation between the two countries has increased efficiently. “In 2010, the Hungarian government announced its ‘Opening to the East’ policy. Since then, China has become a primary partner with Hungary and the two countries have maintained strong and close cooperation in trade and investment, culture, technology, education, financial services and medicine,” Dr. Palkovics told the Shenzhen Daily.

The minister also mentioned that Shenzhen-based companies like Huawei and BYD have invested in Hungary and he hopes that Shenzhen and Hungary can explore more possibilities in innovation ecosystems and the development of technology, as he said the two “fit together” in this field.

Running through Nov. 17, the 21st CHTF will see over 50 delegations from 40 countries and international organizations, including 35 under the Belt and Road Initiative, showcase advanced technologies and products from their countries, especially in the fields of electronic information, AI, smart city, energy saving, new materials, high-end manufacturing, and airspace and aviation.

During the fair, more than 10 countries, including Russia, Austria, the Czech Republic, Bulgaria, the Netherlands, South Korea and the U.S., will unveil new products and host business promotions, road shows, entrepreneurial contests and business matchmaking sessions.