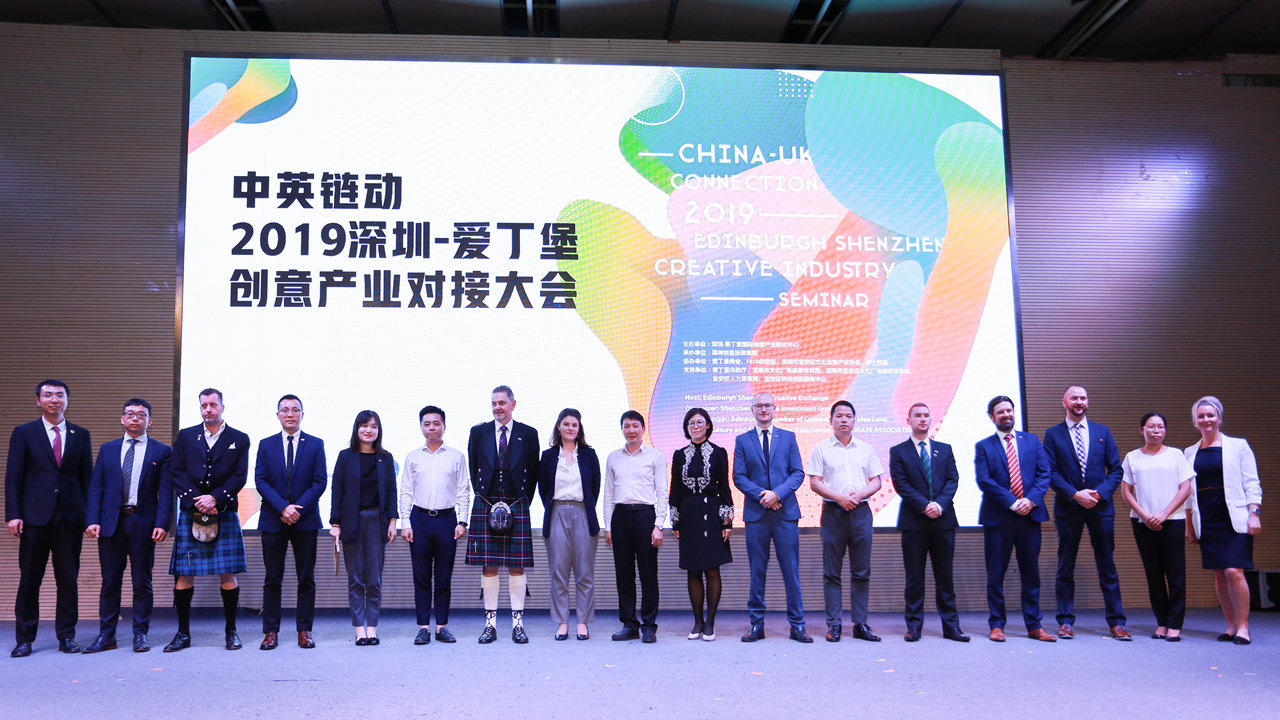 Attendees of the seminar pose for a photo at the seminar. Courtesy of ESCE

A delegation comprising six Edinburgh companies from the cultural and creative sector was looking for cooperation opportunities with local partners at F518 Idea Land in Bao’an District on Thursday.

The event, called the China-U.K. Connection — 2019 Edinburgh Shenzhen Creative Industry Seminar, marked the first time that the Edinburgh Chamber of Commerce had led a business delegation to Shenzhen since the two cities became sister cities this May.

“I have very high expectations for this visit. Personally, I knew that we would get a very warm welcome and we would make very good business connections in Shenzhen,” said Jim Galloway, consultant of the lord provost of the city of Edinburgh.

The Edinburgh delegation is made up of a diversified portfolio of enterprises from the creative industry, including a film and TV post-production company, a professional football club, a real estate firm, a video and animation production company, an educational service company and a law firm.

“I think the companies reflect an eclectic mix of the business community in Edinburgh. They are a good representation of the type of businesses that are interested in collaborating with businesses in China,” Galloway said.

FREAKWORKS is a film and TV post-production company based in Edinburgh. One of their most notable successes has been a series of commercials created for Ganten, a leading Chinese bottled water company.

“We are looking to build on the success of these commercials, capitalizing on our ongoing relationship with Ganten as the example and evidence that we can deliver to brands and agencies in China,” said Hamish Allison, CEO and creative director of FREAKWORKS, adding that they are currently targeting the South China market.

Finlay Stark is the academy administration and operations manager of Hibernian, which is a professional football club in the top Scottish league. Stark told the Shenzhen Daily that the club hopes to build partnerships with clubs in Shenzhen.

“We’re hoping we can share our knowledge and help clubs in China, particularly Shenzhen. We can offer them our expertise in coaching and developing players and football staff,” Stark said.

The seminar, hosted by Edinburgh-Shenzhen Creative Exchange (ESCE), attracted more than 30 representatives from Chinese companies and over 100 guests from home and abroad.

ESCE is also the organizer of the U.K. pavilion of the ongoing 21st China Hi-Tech Fair being held at the Shenzhen Convention and Exhibition Center.

According to ESCE, the U.K. pavilion has brought together a number of outstanding high-tech companies from the country to showcase some of their most cutting-edge technologies at the fair.