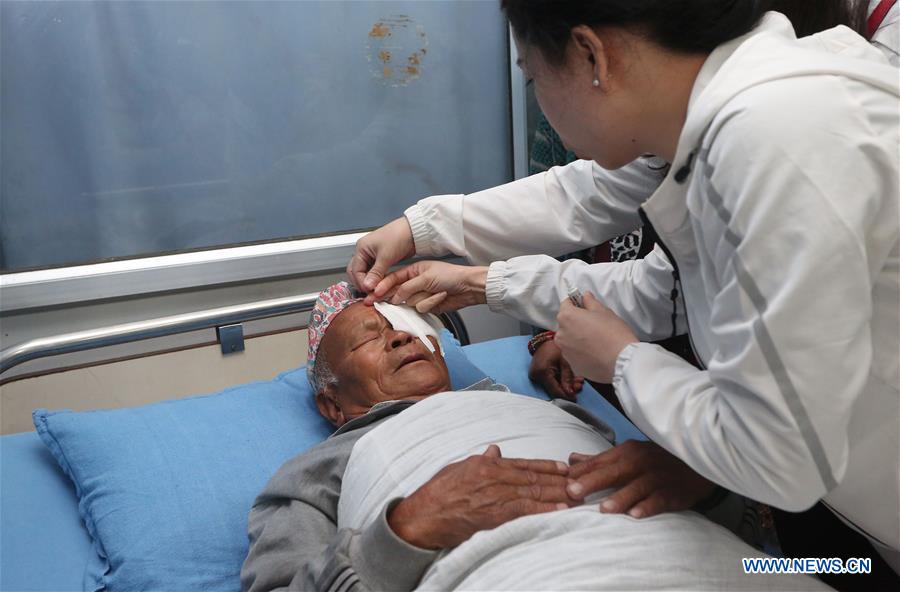 A doctor with the medical team under Shenzhen Chaoqing Charity examines a patient who received a cataract surgery at Manmohan Memorial Hospital on Sunday. Xinhua

A medical team from Shenzhen has provided free cataract surgeries to over 50 Nepali patients in the last two days as part of the programs to strengthen medical cooperations between the two countries.

The medical team under Shenzhen Chaoqing Charity conducted the surgeries, the fifth of its kind, at the Manmohan Memorial Hospital on Saturday and Sunday, and members of the federal parliament and other Nepali officials joined the Chinese Ambassador to Nepal Hou Yanqi to visit the patients at the ward Sunday evening.

Among them, Purna Lal Maharjan, 83, who is from the town of Kirtipur, received the surgery Sunday morning. In a brief interaction with the Chinese ambassador, Maharjan thanked China for making his vision clearer and sharper.

“I had a problem in my left eye for months. I am able to see everything clear now. I am very happy to receive the free operation by the Chinese doctors,” Maharjan shared his happiness with Xinhua from his bed.

Not just Purna Lal, but his wife of the same age, Asta Maya Maharjan, who was sleeping on the adjoining bed, also underwent cataract surgery on the same morning.

“Both my in-laws had eye-sight problems, so they used to wear glasses. Today, both had operations together and can see clearly again. China is a helpful neighbor,” their daughter-in-law Renu Maharjan told Xinhua.

The Chinese ambassador said that China has been sending medical teams to Nepal and also has been providing various training and scholarships to the local medical workers.

China will continue to promote medical cooperation with Nepal, she said.

According to Arniko Society, the co-organizer of the event, as part of the medical cooperation program, the Shenzhen charity has already helped more than 300 Nepalese patients to regain eyesight and has conducted free eye checkups for thousands of others since the first such free eye operation service camp was held in 2014.

Expressing gratitude to the Chinese organization, hospital chairman Rajendra Pandey said that the free camp has highly befitted the people from families with low incomes, who cannot afford timely treatment.

“China has been helping us in different sectors for our economic development and prosperity. This free camp is one of the examples,” said parliament member Pampha Bhusal.