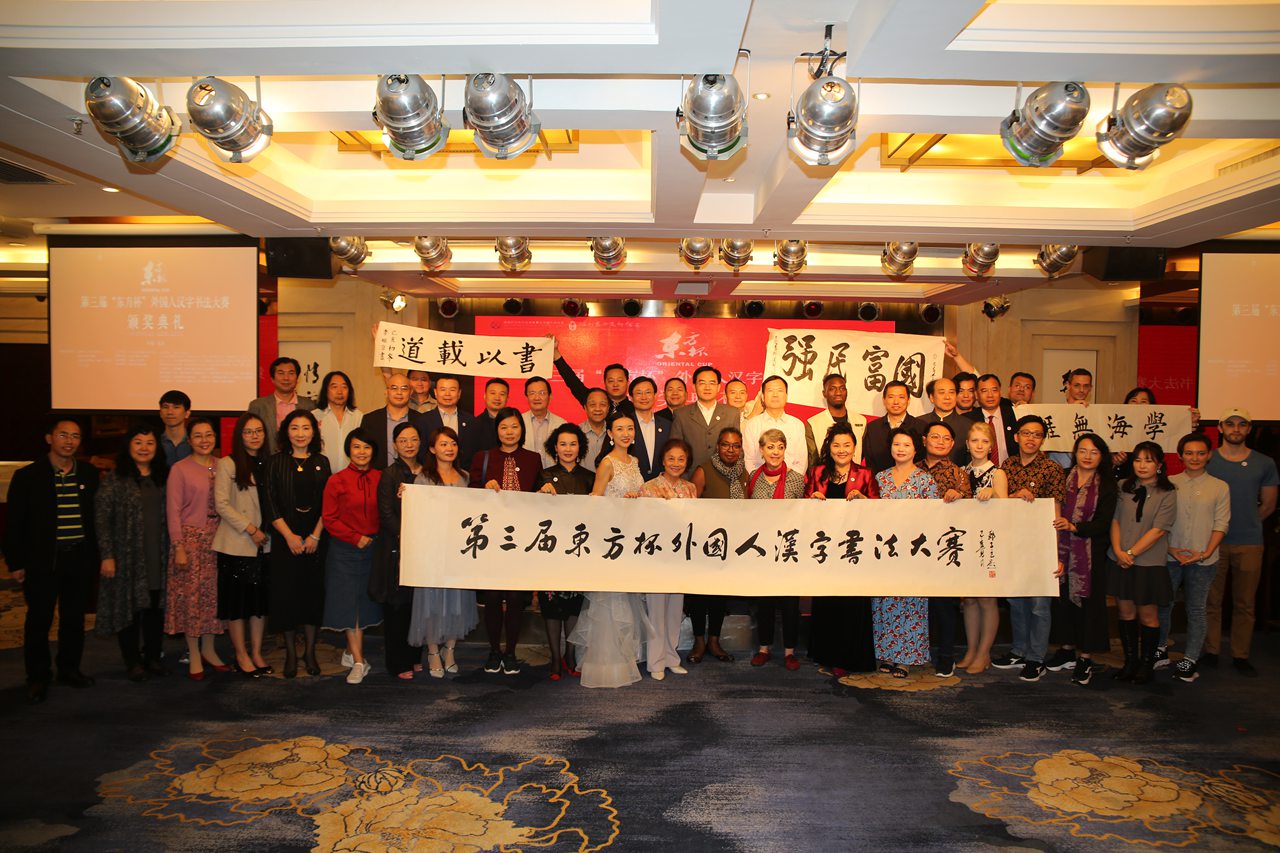 Attendees pose for a photo at Saturday’s awards ceremony. Courtesy of the organizer

The awards ceremony of the Third “Oriental Cup” Chinese Calligraphy Contest for Expats was held in the Grand Mercure Oriental Ginza Hotel in Futian District on Saturday, attracting a large audience.

Since its launch June 15, the contest has received more than 500 Chinese calligraphy works created by calligraphy enthusiasts from 54 countries, which has allowed more expats to appreciate the charm of Chinese culture and promoted the cultural exchanges between China and the world at large.

Judging from the professionalism, overall artistic feeling and the character of the works, the judges scored the works in a strict and fair manner. In the end, one first prize, two second prizes, three third prizes and 20 honorable mentions were awarded.

The regular script “Watching the Waterfall of Mountain Lushan” from Lee Hee Kyung, the first prize winner from South Korea, was considered to have an exquisite layout and reflected the dignified calligraphy features of Yan Zhenqing, a calligraphy master of the Tang Dynasty (618-907).

Li Ruiqi, vice chairman of the Guangdong Federation of Literary and Art Circles, said that Chinese characters have a history of more than 5,000 years.

“The contest spread the unique form and charm of Chinese characters to foreigners, allowing them to deeply understand Chinese culture. I hope the contest will become a portal for Shenzhen to demonstrate traditional Chinese culture to the world,” said Li.

Gao Dawei, Futian’s publicity chief, spoke highly of the contest. He said that the contest has generated widespread influence and attracted concentrated attention among foreigners, as well as becoming an important cultural event for Chinese and foreign cultural exchanges.

“I hope that the contest will continue to carry forward and promote Chinese culture, letting Chinese calligraphy shine gloriously everywhere in the world,” he said.

The event was sponsored by Futian’s publicity department and funded by the special fund for the promotion of cultural and sports undertakings in Futian District.

The prize-winning calligraphy works were exhibited at the Shenzhen Oriental Art Gallery on the day of the awards ceremony, and the exhibition will last until mid-December.