Tencent to build ‘city of the future’ 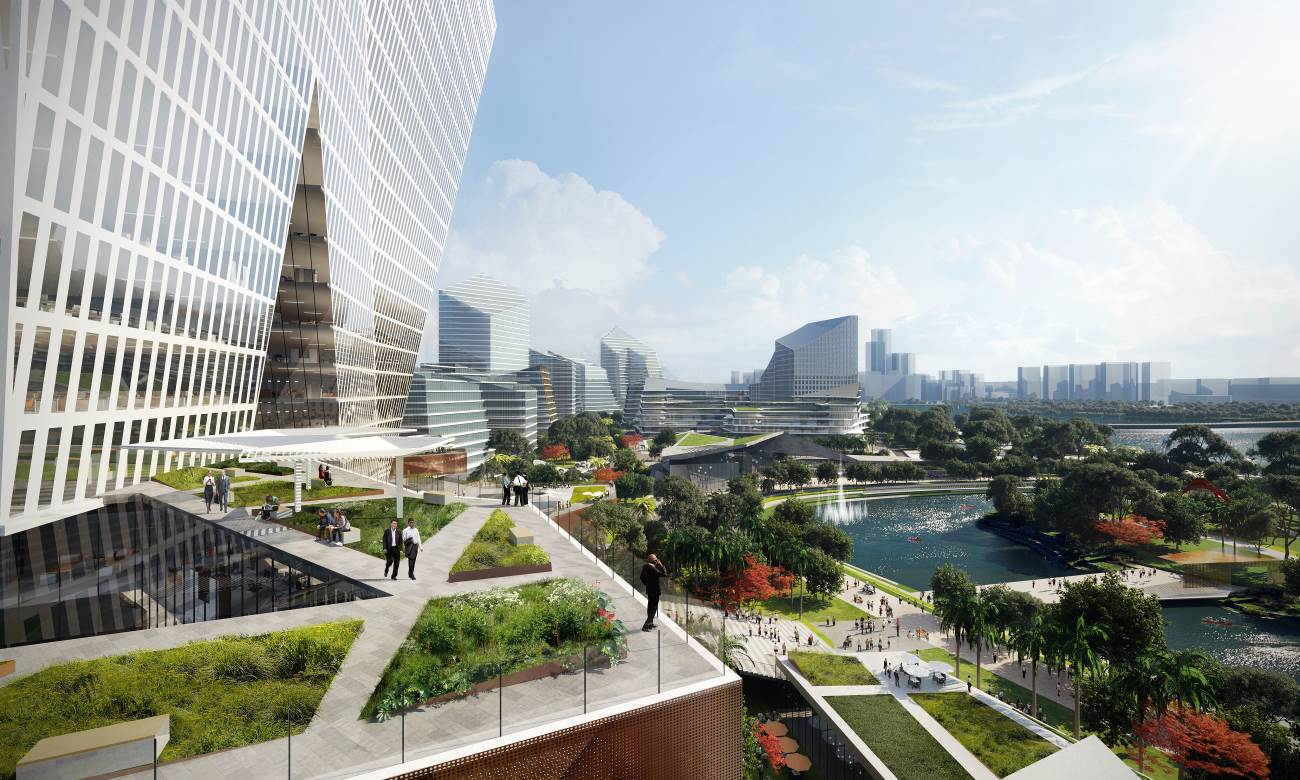 A computerized image of Tencent’s “City of Future.” Courtesy of Tencent

Shenzhen-based Internet company Tencent has unveiled plans for a nearly completely car-free “city of the future,” which is roughly the size and shape of Midtown Manhattan.

Award-winning architecture and design firm NBBJ has been selected to design the “city within a city,” which is dubbed Net City, with a construction area of 2 million square meters on a stretch of reclaimed land along Shenzhen’s Dachan Bay, NBBJ said in a press release recently.

Tencent, the conglomerate behind WeChat and China’s standard QQ messaging service, won the bid for the land parcel of Dachan Bay with a listed price of 8.52 billion yuan (US$1.2 billion) last year. Thereafter, it held an international design competition, which saw the architectural firm NBBJ come out on top. The award-winning design “reflects the distributed network of the Internet itself,” said Jonathan Ward, a design partner at NBBJ.

Net City, designed to accommodate some 80,000 people, will have office buildings, residential areas as well as public entertainment venues and parks. The heights of the buildings will be varied to “provide strong sightlines to nature, other buildings and the rest of the city,” says the press release from NBBJ.

In addition to offering company residences and workplaces, the neighborhood is anticipated to host outlets, colleges and different public facilities, and will likely be linked to the remainder of Shenzhen through street bridges, ferries and the subway system.

“It is definitely a destination (and has) a civic component,” said Ward in a cellphone interview with U.S. news network CNN. “It’s not meant to be an isolated, secure island — it’s a vibrant city. People will walk through it, they’ll connect … and it will be a vital hub for Shenzhen.

“Our main goal was to provide a place where innovation can really flourish,” he continued. “To do that, we tried to minimize the impact of the car as much as possible.

NBBJ’s master plan prioritizes pedestrians, with limited access to conventional vehicles. It is designed to supply what it calls an “interconnected, human-focused organic ecosystem.” For Tencent staff, this may increasingly imply eroding the difference between their work and personal lives, Ward stated.

Net City will incorporate sustainable design, from solar panels on the rooftop, to sensors that track flooding and environmental performance. The design meets the goals of China’s Sponge City Initiative, which aims to use ecologically friendly alternatives to combat flooding.

To that end, Net City collects water on campus, manages run-off and flooding, and plants mangrove trees at the shoreline.