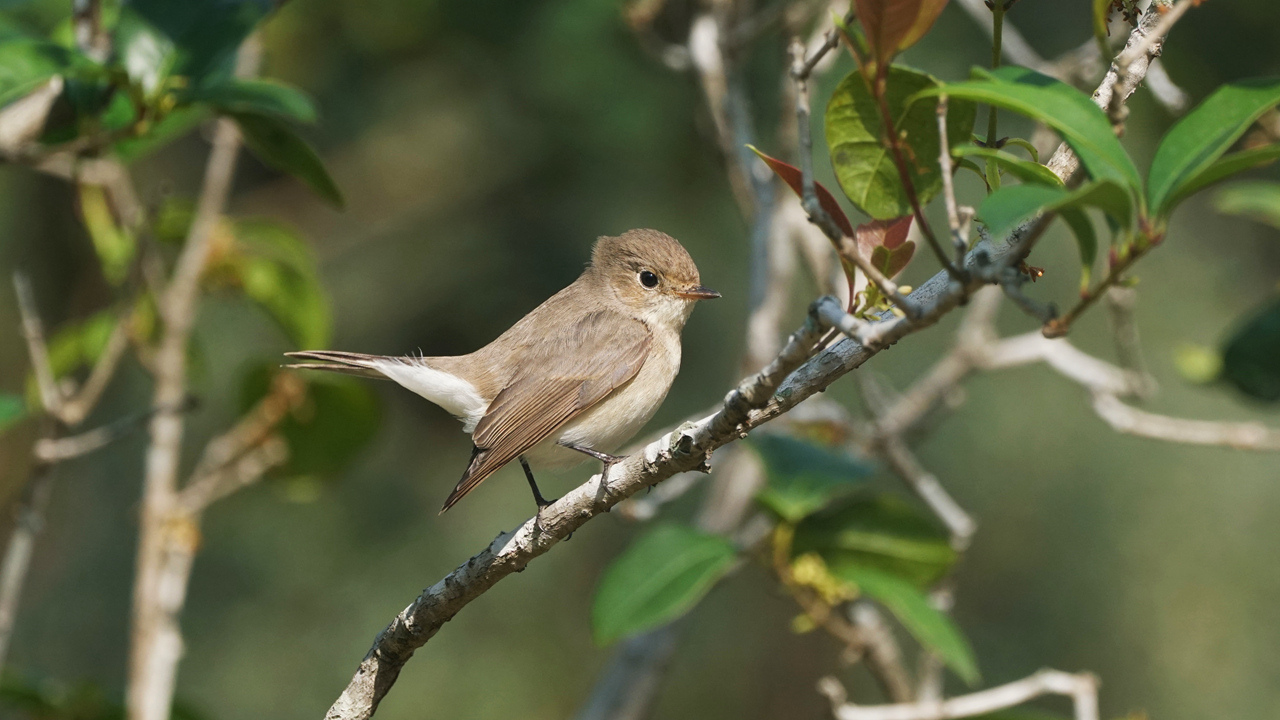 A red-breasted flycatcher perches on an Osmanthus tree at Lianhua Hill Park in Futian District on Tuesday. Wang Haolan

A red-breasted flycatcher (Ficedula parva), which is identified as “rarely seen” on the book “The CNG Field Guide to the Birds of China,” was spotted at Lianhua Hill Park in Futian District recently.

A member of the Shenzhen Bird Watching Society identified by the nickname “Cormorant” was the first one to spot the flycatcher at the park Saturday.

The bird was still seen hopping among some Osmanthus trees near a footbridge linking the park and the Civic Center on Tuesday. It moved within the canopy, suddenly dashed to catch an insect, then returned to the tree it perched on previously and started to sing in a slight rattling voice, showing some typical flycatcher species behavior.

The bird is in its winter plumage, which is overall brown with its belly in white. The male bird’s breast and throat color will turn into rustic red when breeding season (from May to July) comes.

The species is a passerine bird from the flycatcher family with an average length of around 11 to 13 centimeters. It breeds in Eastern Europe and Central Asia and migrates to the southeastern parts of Asia in winter.

It was first spotted in Taiwan in the 1990s and there have had only a few spotting records of red-breasted flycatcher as stray birds in the Xinjiang Uygur Autonomous Region and in the coastal areas of East China since then, according to the guidebook and the latest version of the China Bird Report (CBR) Checklist of Birds of China. It has been spotted in Shenzhen twice since November 2019 according to some local birding reports.

The red-breasted flycatcher used to be a subspecies of Taiga flycatcher, stated Pu Ying, a member of the bird watching society who often goes by her nature name “Bluestar,” in her personal WeChat account.

“The color of the underpart of the beak and the tail of a red-breasted flycatcher is lighter than those of a Taiga flycatcher. Also, as to the winter plumage, the former species has some pinkish feathers on its throat and breast while the Taiga flycatcher’s is overall white,” Pu explained about the differences between the two species in an article published on her account.

The Taiga flycatcher also visits Shenzhen in winter, which can be found in locations including Lianhua Hill and Honghu parks.

Due to the recent local COVID-19 cases reported in Shenzhen, the bird watching society reminds birdwatchers to take personal safety precautions while birding and not to visit birding sites in districts recently designated as medium-risk areas.