Located in an old housing compound in Futian District, Joys & Coffee is like “a violet by a mossy stone,” half hidden from the eye as it is so small — narrower even than the parking space in front of it — but nevertheless embracing a power to heal those looking for a moment of peace.

Joys & Coffee is sandwiched between a laundry and a pharmacy in an old housing compound in Futian District.

Courtesy of the interviewee unless otherwise stated

Painted pale gray both inside and outside, the café offers a sense of calmness and warmth, especially at night when a beam of light sheds from a small window over its doorway. When you step into the café and look up, its high-rising arched ceiling further accentuates the peaceful feeling. Before renovation, the 9-square-meter space was a repair shop for household appliances, which, according to Yang Qi, owner of the café, was dirty, greasy and messy. 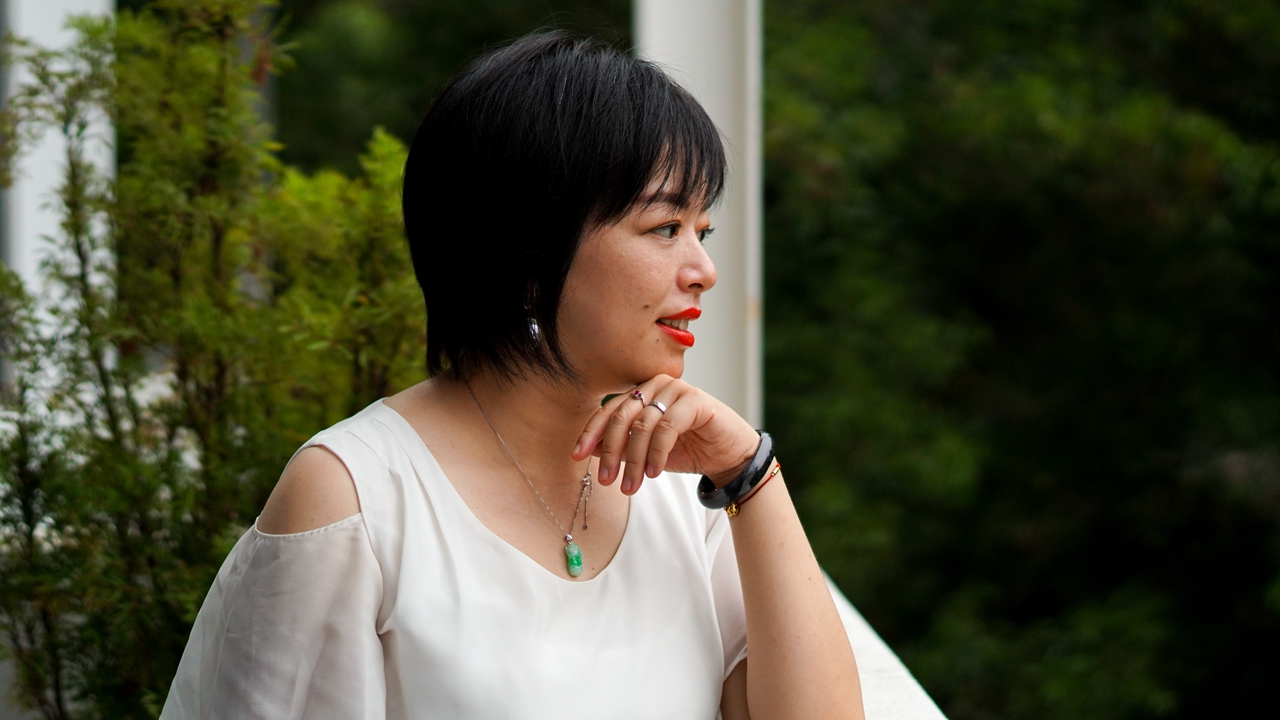 Yang used to be an architect. She quit her job a few years ago and decided to open a small café. In 2019, she contacted Zhang Bo and Wang Jingjing, founders of Onexn Architects, a Shenzhen-based architecture design studio, and commissioned them to renovate the space.

Wang and Zhang, both Shenzhen University graduates, founded the studio in 2015. With the belief that space should serve the people who use it, they hope to bring better end-user experiences while helping their clients to achieve their goals through design. 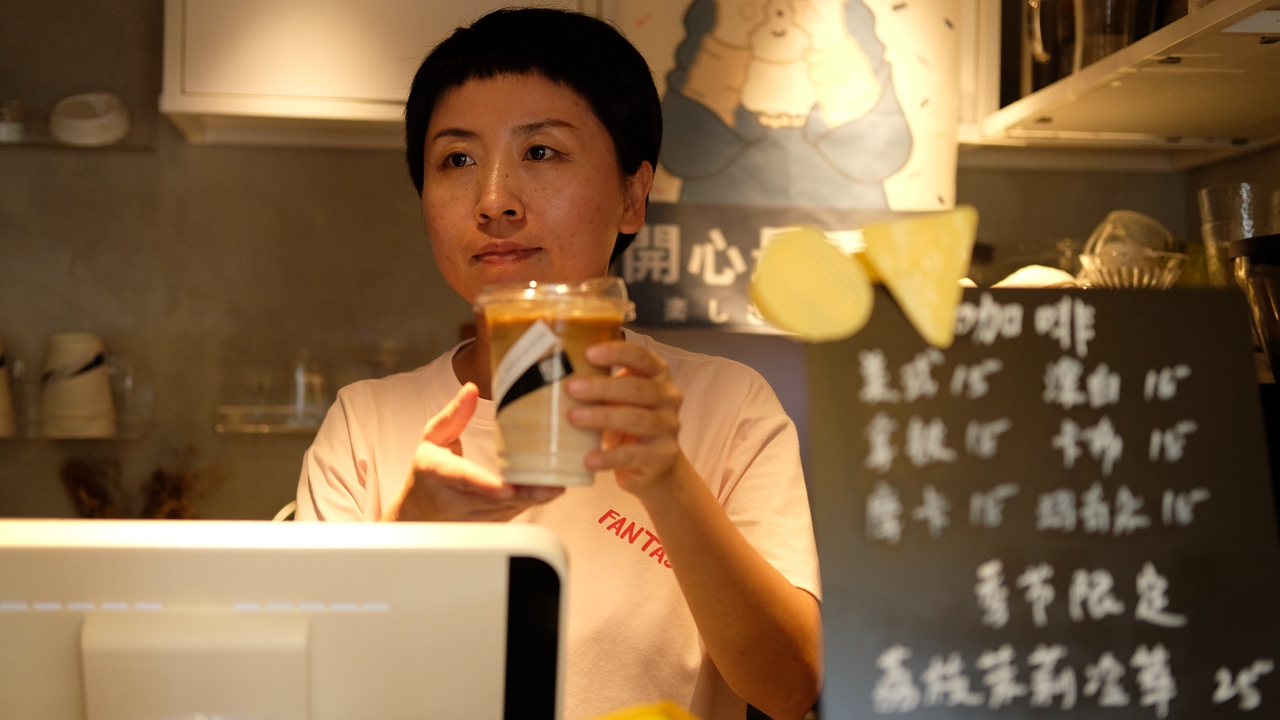 Yang Qi delivers a cup of coffee to a customer. Lin Lin

When Yang entrusted the project to the designers, she gave them a simple but not so easy task — make efficient use of the limited space and build the café into a spiritual retreat for visitors.

Located in the old housing compound built in the 1990s, the café is flanked by a laundry and a traditional Chinese pharmacy, which, like many traditional shops in China, topped the storefront with big signage boards. Instead of taking a similar approach, the design team raised the porch of the café, left an empty space above its doorway, added lights in the space and paved gray tiles in front of the café to define its boundary without making it obtrusive.

“When we work on a project that can be connected to the surrounding community, we look at how people interact with the space,” said Wang. “In the case of Joys, the gray space in front of it provides a sense of security to residents in the community. People are welcome to stop by the bar table at the gray space and they will feel respected.”

With a focus on the needs of people, the project was listed by U.K. architecture media outlet Dezeen as one of the top 10 architectural projects in China in 2020.

Sijili, another project by Onexn Architects, also a renovation project highlighting the connection between a space and people living in the surrounding neighborhood, won them a silver prize from the Berlin Design Awards 2022. 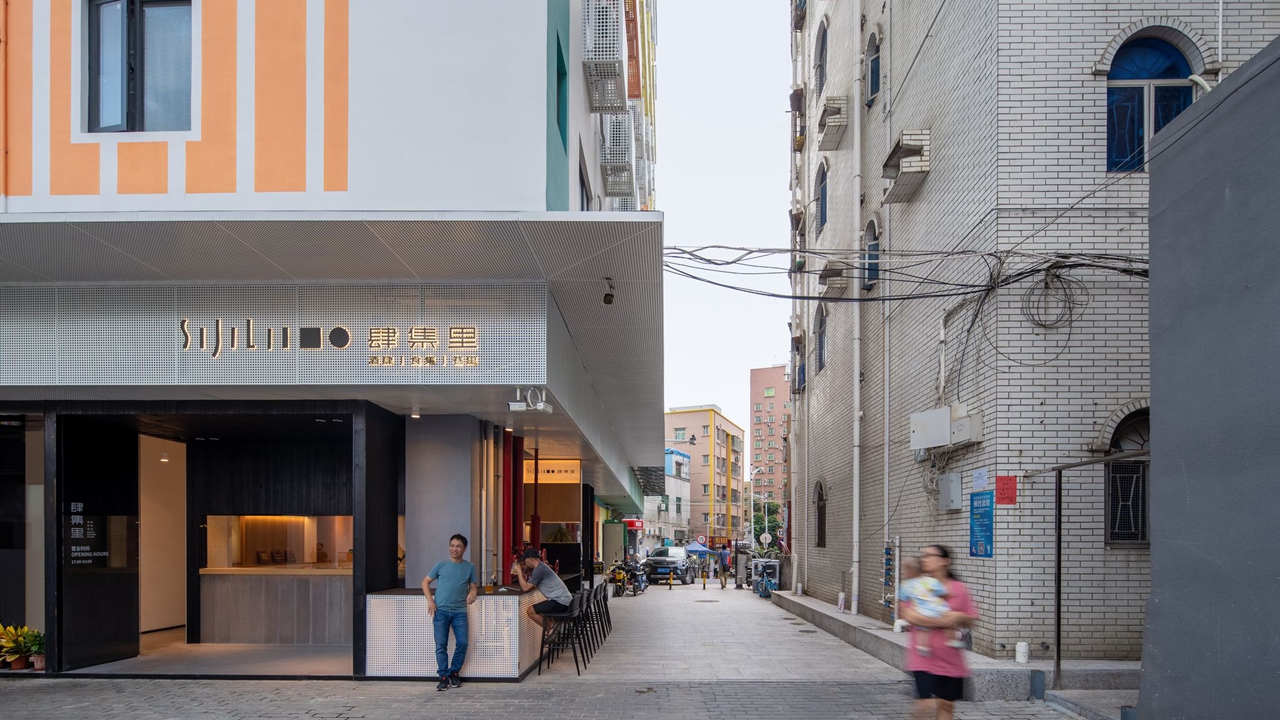 A view of the Sijili restaurant in Longhua District. Zhang Chao

Sijili is a restaurant located in an urban village in Longhua District. It consists of an indoor space and an outdoor space that used to be a public square. For the design team, the key to the project was the boundary of the restaurant and the public square. Before designing, the team did a field study at the site and found that the square had served as a place where seniors could do workouts, children could play and pet owners could walk their dogs.

“We realized that the square had provided a leisure space for people living around the neighborhood, a place where they could slow down,” said Wang. 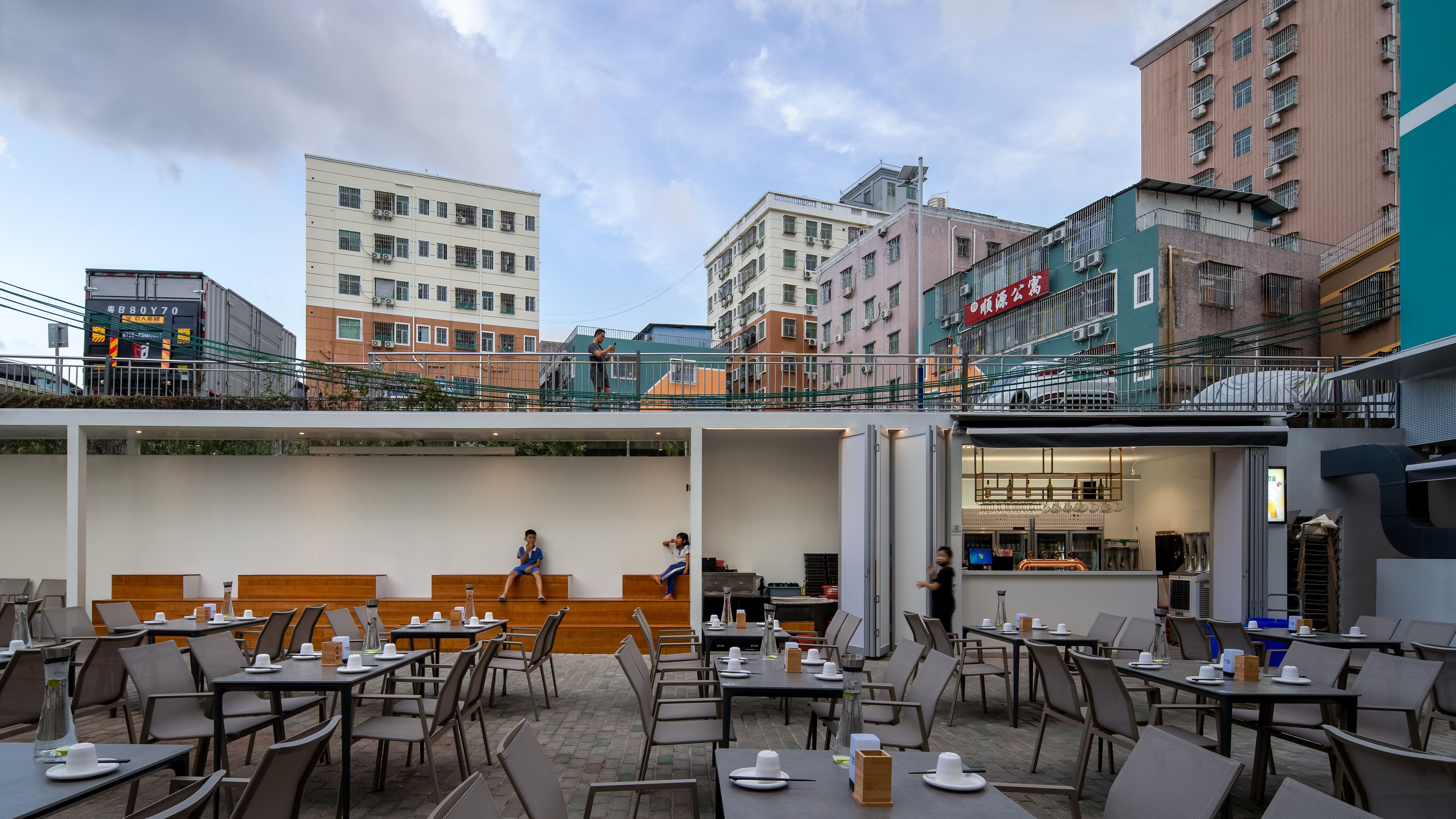 The stairs at the square of Sijili, where people can hang around. Zhang Chao

To retain the original functions of the square, the design team set up some installations, such as bars where seniors can stretch their legs, boxes where children can play, a stair structure where residents can take a seat and hang around, and a pet station where people can walk their pets. 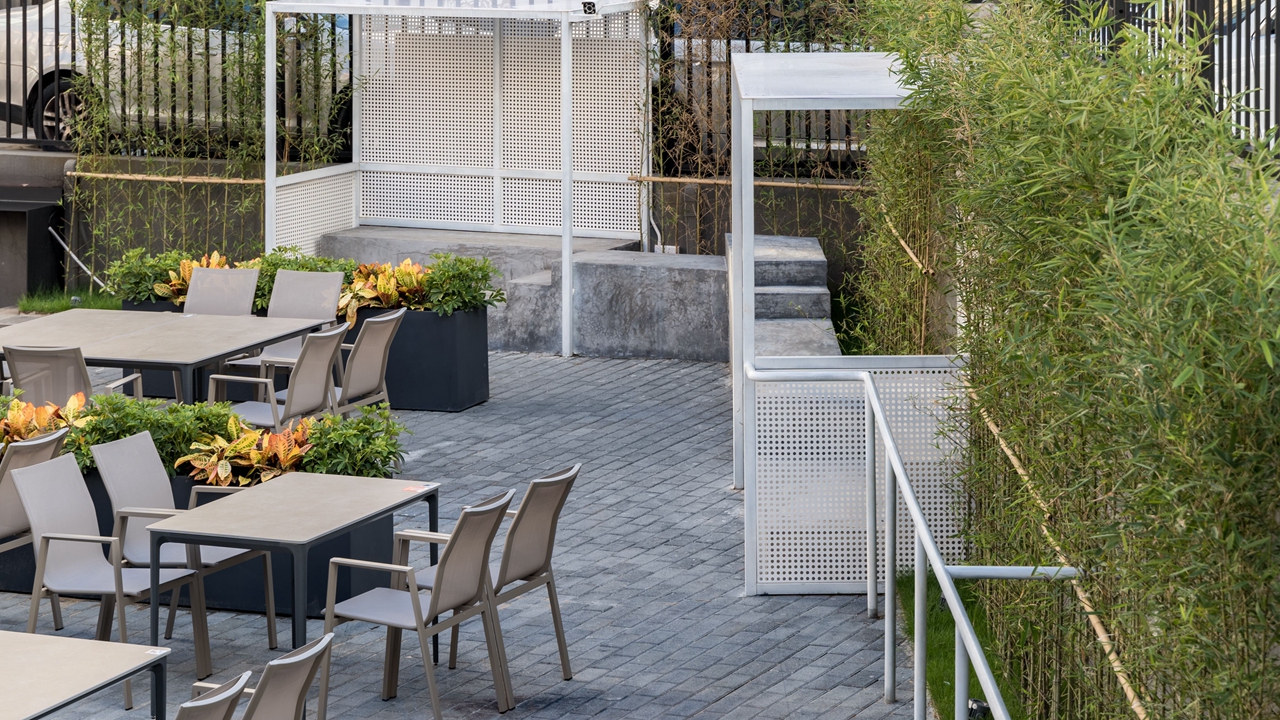 Installations set up at the public square of Sijili, where seniors can do workouts and children can play. Zhang Chao

Both Joys and Sijili create spaces open to their surrounding neighborhood, while the Mountain View, a cultural space at OCT-LOFT in Nanshan District, has been designed in a way that brings its visitors closer to the surrounding natural environment.

Before renovation, the Mountain View was an abandoned multi-floor building with only the first floor serving as a canteen. Its location on the hillside of Yanhan Mountain inspired the design team to make it into a space to communicate with nature. 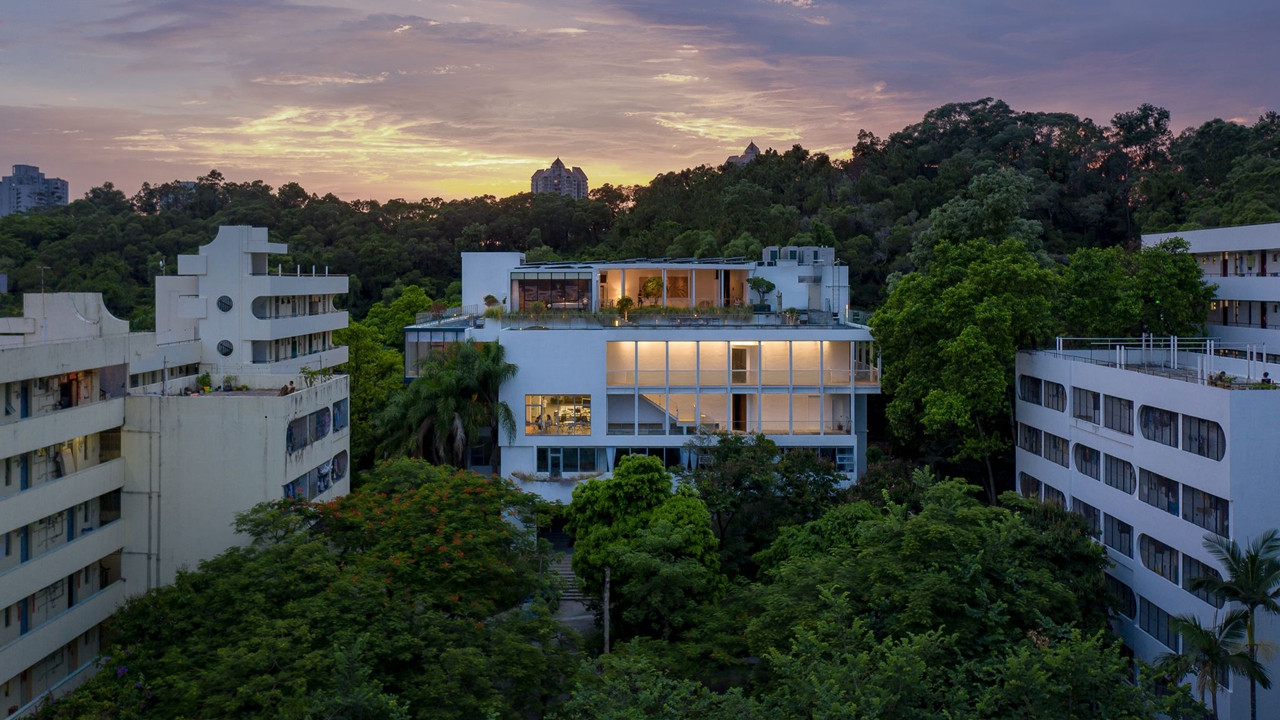 A view of the Mountain View in Nanshan District at dusk. Zhang Chao

“The building accommodates some public cultural facilities, such as a theater, an art museum, a café, small exhibition halls and a restaurant. We hoped that when people visited the place, they could also be invited into nature,” said Wang. “Shenzhen is a fast-growing city. People live a fast-paced life. We hoped that they could slow down when they came here.”

To achieve the goal, the design team set up multiple gray spaces at the building, such as balconies, where visitors can be greeted by luxurious trees and bird singings on Yanhan Mountain, and a corridor near the entryway of the theater, where people can see rich foliage, an open view of OCT-LOFT and the white pogoda in the International Garden and Flower Expo Park. 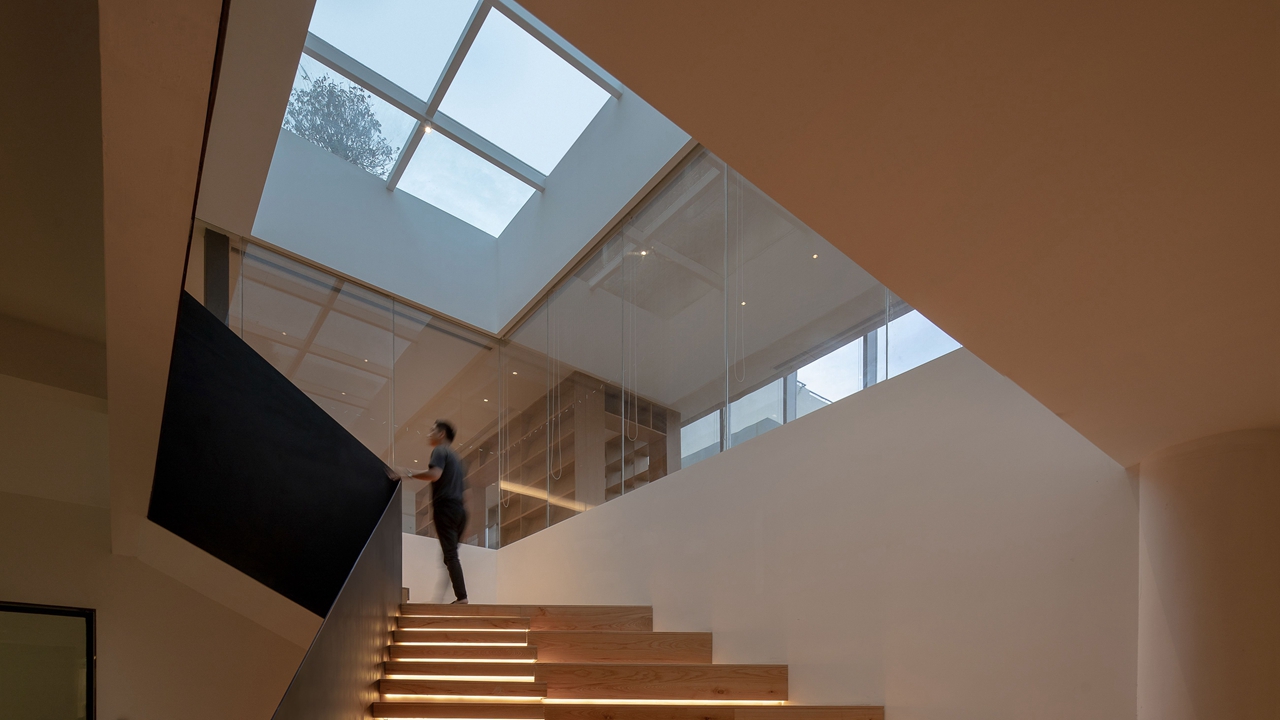 Natural light shed through skylights into the building of Mountain View. Zhang Chao

According to Wang, the corridor was not part of their early plan. The idea of building a corridor in front of the façade of the theater came after the team saw a stunning sunset view on the roof.

“Seeing the gorgeous sunset, the buildings that stretched into the distance, and the white pagoda cast in gold light, we were just impressed,” said Wang. “We wanted to share the view with everyone else who came here. So we changed the design and added the corridor and a staircase that led to the theater. When people visit the theater, they can stay for a moment on the corridor and enjoy the beautiful scenery.” The corridor that leads to the theater at Mountain View. Wang Haolan

Since the foundation of their studio, Wang and her team have been devoted to multiple renovation projects, not only for community buildings but also for industrial spaces. They have also accomplished multiple projects on office buildings for company headquarters, apartments, hotels and commercial complexes.

Some wondered why they didn’t focus on just one category. Wang has her answer. “When we meet an interesting project, we’re always eager to be part of it. So when a client reaches out to us, we look at and interpret from our perspectives the habits of the clients and their understandings about life. Then we can integrate our interpretation into the design of the space. That’s always intriguing for us.”