These Italian entrepreneurs probably know better than most people the Chinese expression “wei ji,” whose equivalent in English is crisis, with “wei” signifying danger and “ji” signifying opportunity or change point. In ancient Chinese philosophy, every crisis offers a golden opportunity.

Alessandro Mugnano, 38, and Enrico Palmentieri, 45, from Italy, not only deeply understand this philosophy, but also put it into full practice and have obtained great success in their business. 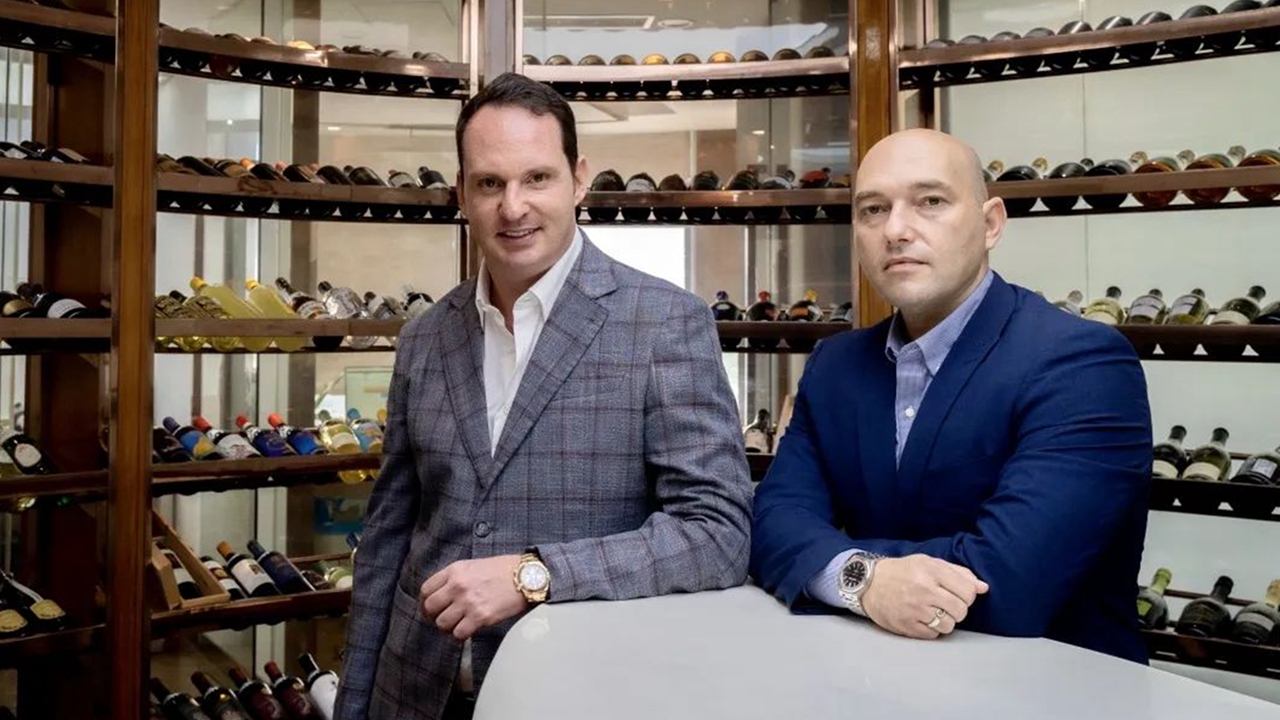 Alessandro Mugnano (L) and Enrico Palmentieri pose for a photo in their office.

In 2012, the two founded Interprocom Cantine Divine in Shenzhen with two other Italian partners Ivana Mugnano and Ferdinando Rizzo. The company has grown so much that it has become China’s largest Italian wine importer since 2018. Despite the pandemic, the company achieved a 2% growth year on year in 2020 and 21% in 2021. In March this year, they also opened an Italian restaurant in Shekou, which is doing well. They will open another one by the end of September. 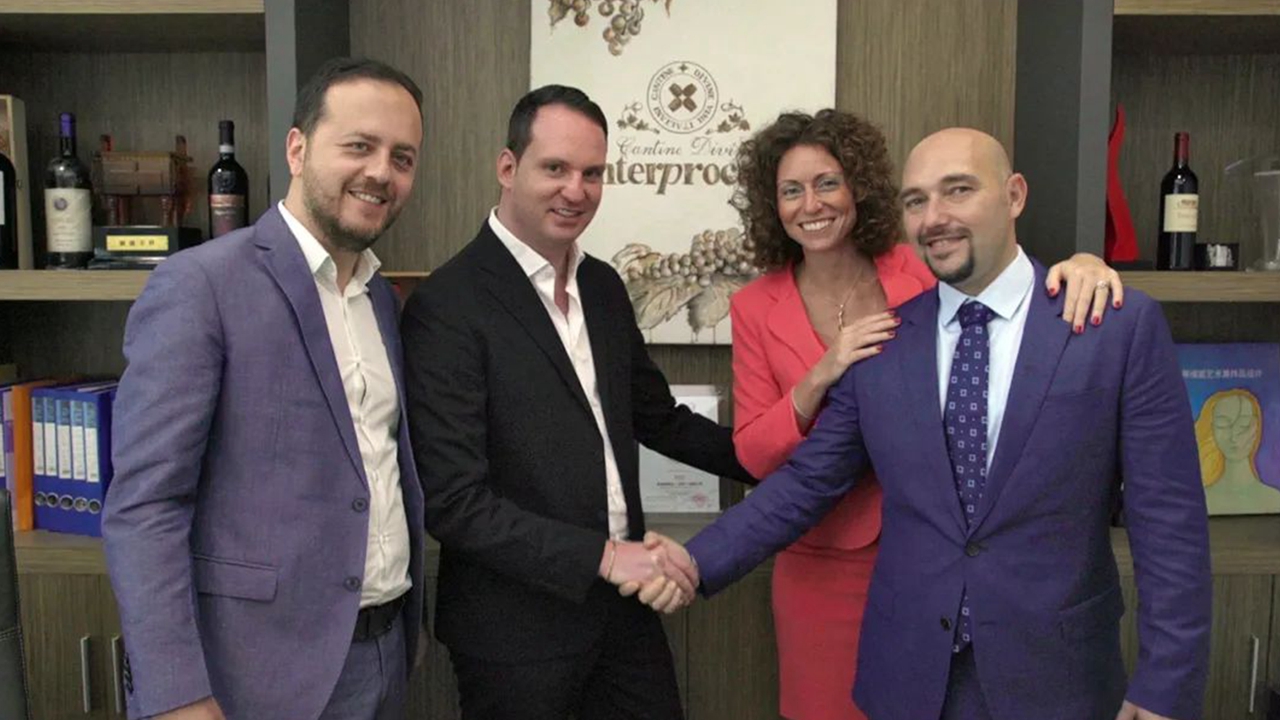 (From L) The four co-founders of the company: Ferdinando Rizzo, Alessandro Mugnano, Ivana Mugnano and Enrico Palmentieri. Courtesy of the interviewees.

“I really like Chinese culture. Chinese culture teaches me a lot about strategy. Sometimes the problem is not just a problem, but also an opportunity. And this is what I learned from Chinese culture,” said Palmentieri, co-founder and general manager of Interprocom Cantine Divine. 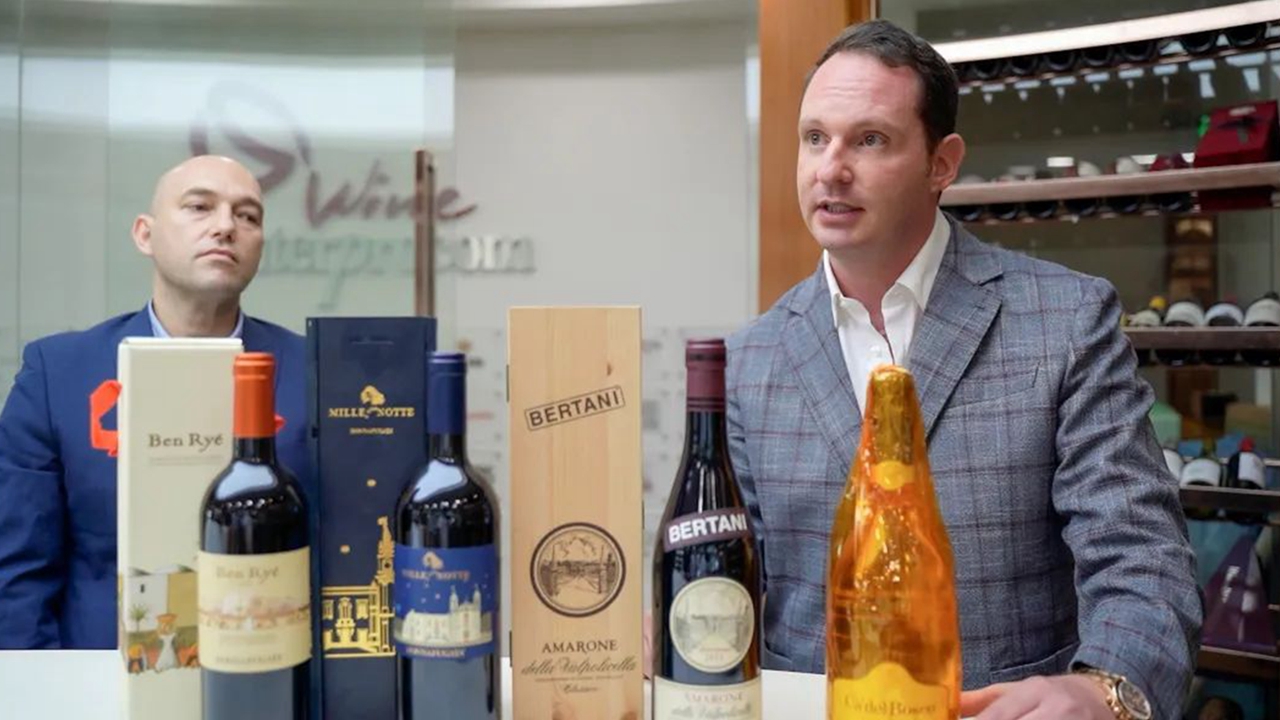 Alessandro Mugnano and Palmentieri came to Shenzhen some 12 years ago, originally planning to bring Chinese products to Italy. However, they ended up importing Italian wine to China, a huge market with great potential.

“It’s quite a funny story, because at that time we tried to do trade, to bring some good products from China to Italy. So, we came here just to look for new products, but in the end, we started to do wine business and we chose Shenzhen just because really it’s the city that we love,” Palmentieri said. 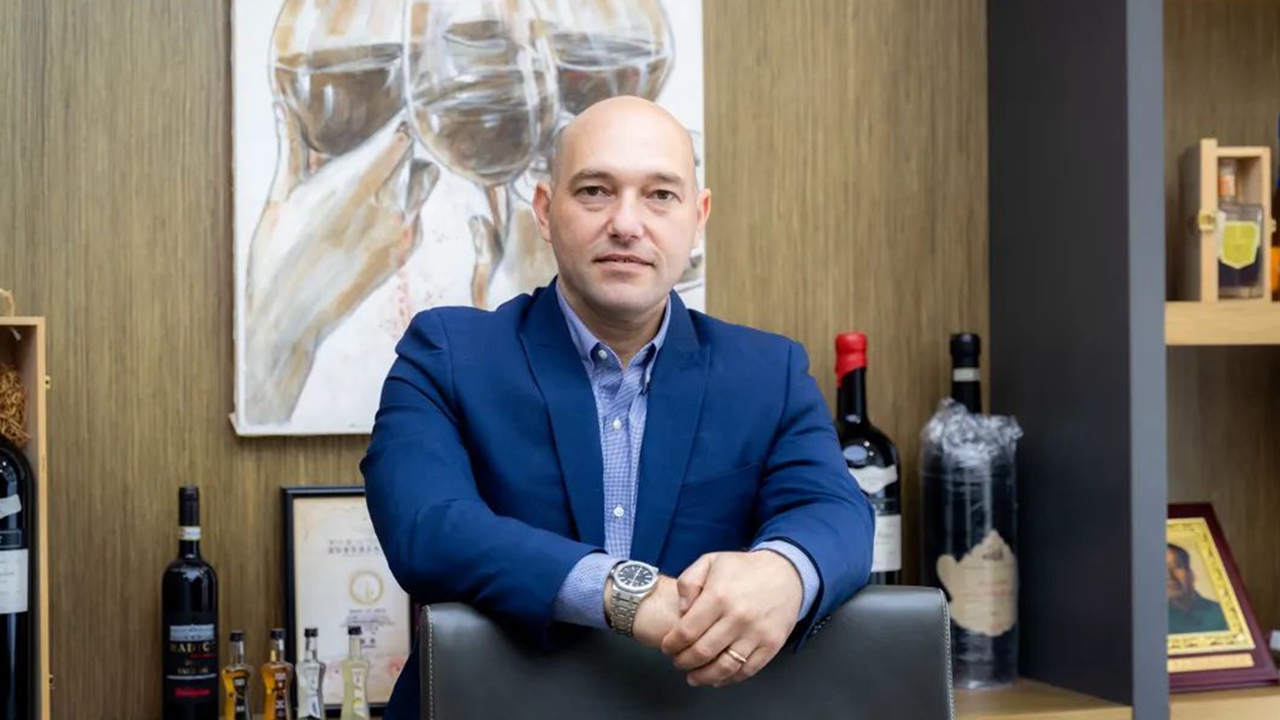 For Mugnano, co-founder and CEO of the company, Shenzhen has been the first and only city in China where he has been living for many years. “What brought me here basically was the desire to spread the ‘Made in Italy’ in the Chinese market, and the desire to face some new challenges. I chose Shenzhen because in my opinion, Shenzhen is the fastest-growing city, one of the fastest we have in China,” he told Shenzhen Daily.

They started from scratch 10 years ago. Currently, the company has its headquarters in Shenzhen with branch offices in Guangzhou, Shanghai and Beijing. It has 54 brands and nearly 800 SKUs of Italian wines in its portfolio. 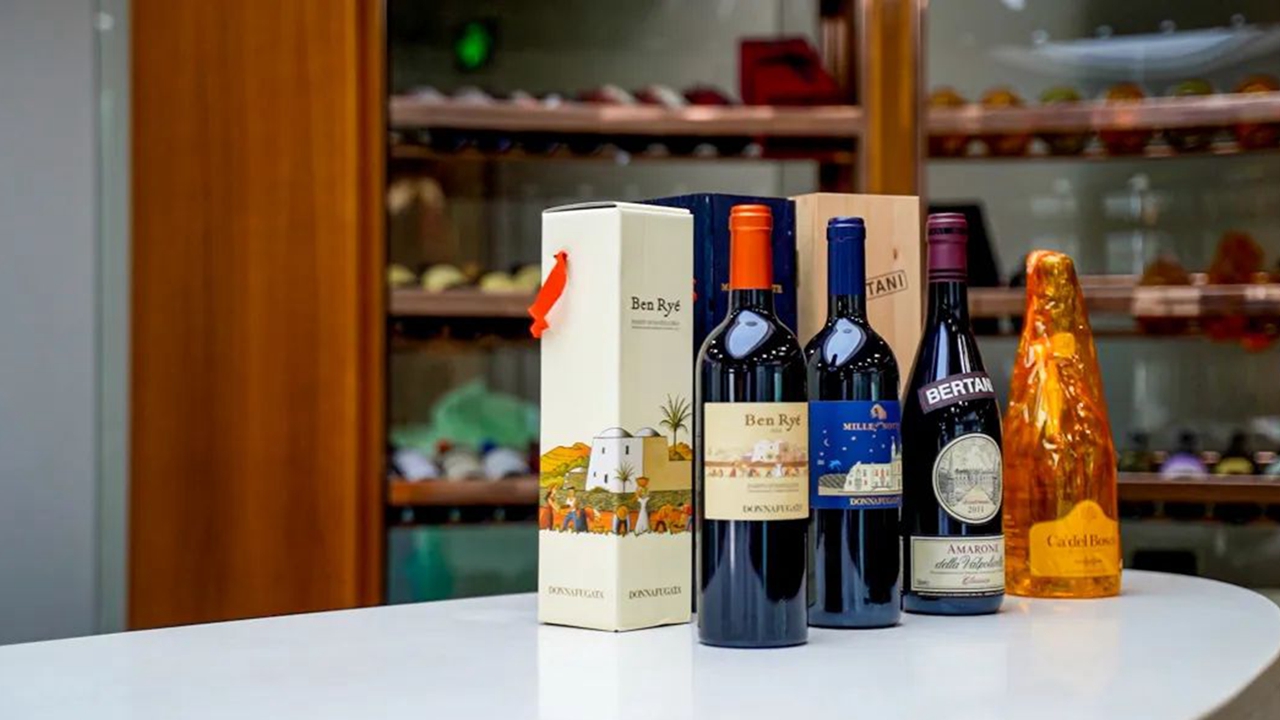 Some of their representative wines.

“At present we have in sole agency the greatest portfolio of Italian wine brands. We sell our products across 30 provinces in China. Guangdong is the province where we sell most, and actually, it’s the province where we started our distribution. We fully cover Guangdong Province since we sell our products in every single city. Shenzhen market has been developing a lot, and until now Guangdong is still the major province in terms of wine sales. Our other main areas are Shanghai, Northeast China, Sichuan, Beijing and Guangxi,” Mugnano introduced.

However, the journey to success has not been easy for them. “We have met thousands of difficulties and problems. We can actually write a book about it,” both interviewees said. The difficulties they encountered ranged from setting up the company, to building up a team in China and overcoming the obstacles caused by the recent pandemic. 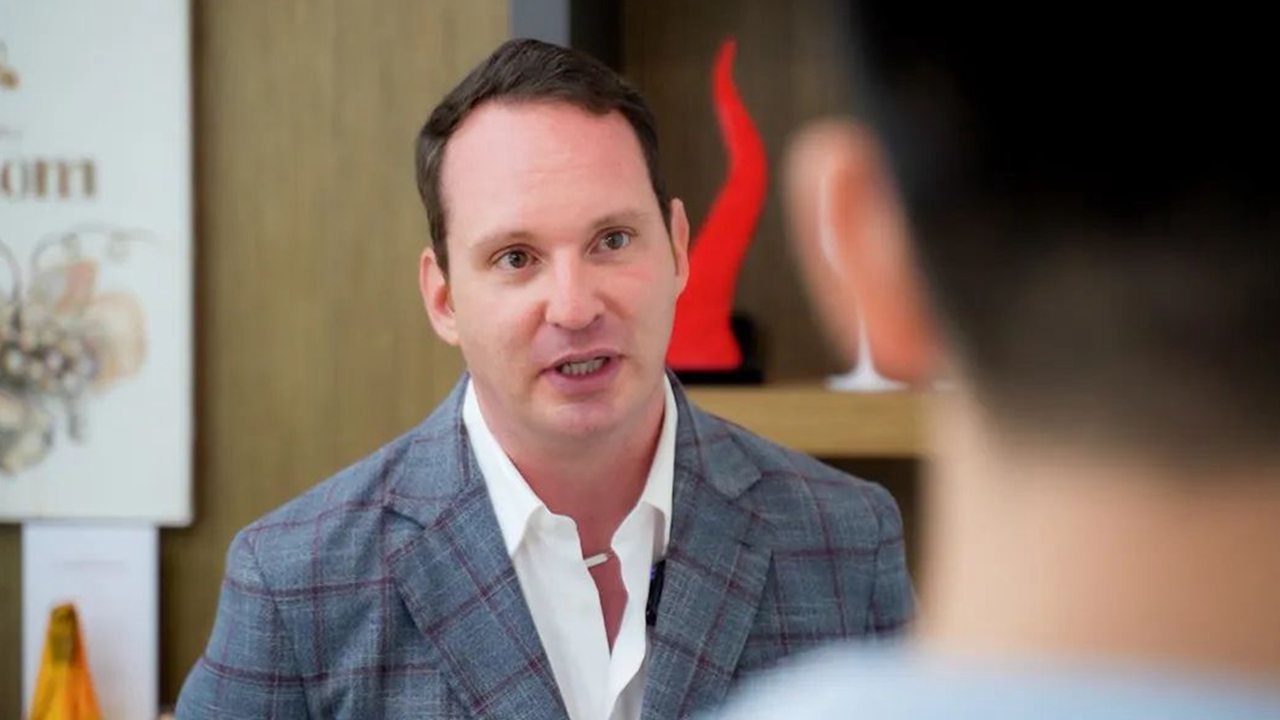 Alessandro Mugnano talks to an employee.

One of the main difficulties was that back then, not many Chinese people knew about Italian wines. “If we talk about 10 years ago, most of our customers didn’t even know that Italy can produce wines. They thought Italy was just for fashion and shopping. So, we started everything from zero, to let them understand the potential and the quality of Italian wines, and that Italy is one of the biggest producers of wines in the world,” Mugnano explained.

According to Palmentieri, about three years ago, white wine was not well accepted in the Chinese market, but now, the situation has changed. 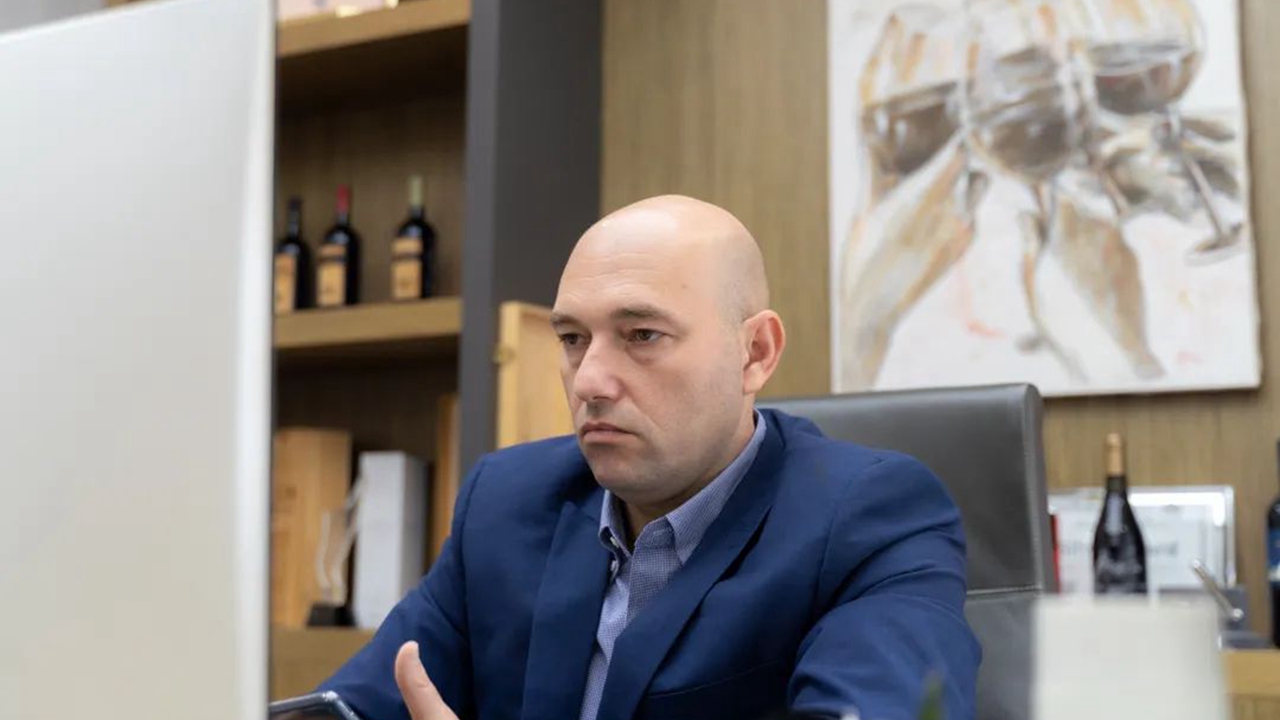 Enrico Palmentieri works in his office.

With strong determination and perseverance, they have developed the company to become the largest Italian wine importer in China in 2018, which has remained that way since then.

“I still remember that in 2018 we had quite a big party here in Shenzhen to celebrate that we imported 100 40-foot containers in China within one year for the first time. Then from 2018, every year we have achieved growth,” Mugnano said. 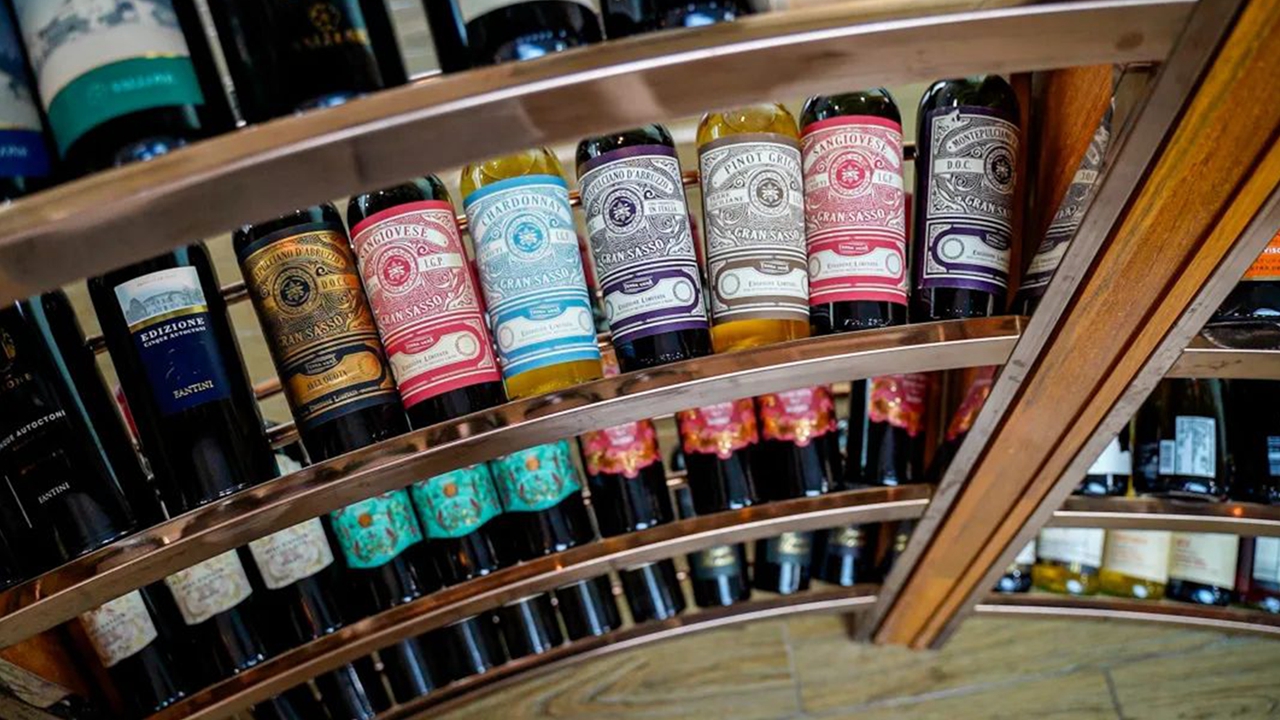 Some wines exhibited in their office.

The pandemic does not let anyone off, including Italian wine importers.

“The pandemic affects everything, including our daily social life. At the very beginning, it has been very difficult to deal with, but at the same time we, together with my team, developed a customized strategy to overcome it,” Mugnano said. 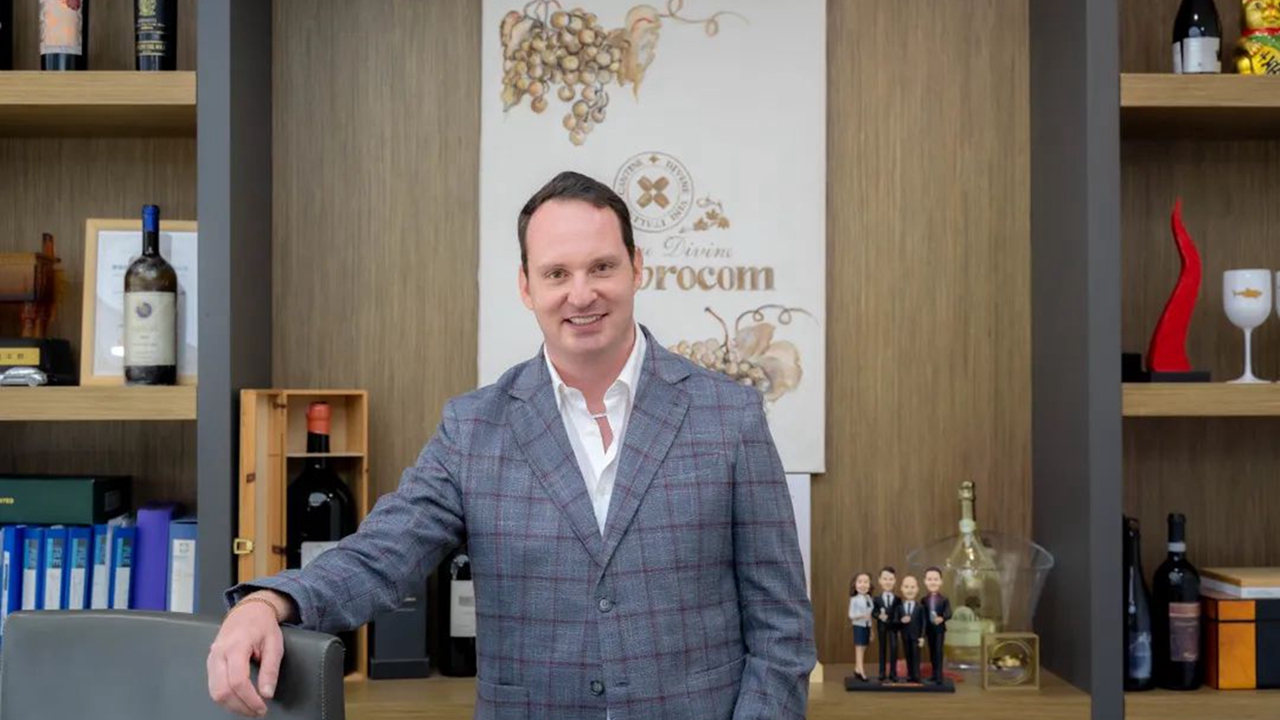 Alessandro Mugnano in his office.

“Behind any big crisis, there are always great opportunities. So, what we did during this time, and the reason why we have achieved growth in such a difficult moment, is to keep investing, to keep having double efforts, and at the same time, to be the first in line to grab all of the new opportunities found in the market,” Mugnano said.

During the pandemic, one of the most affected was the horeca (hotel, restaurant, café) channel. To cope with this, the company diversified their strategy and channels. 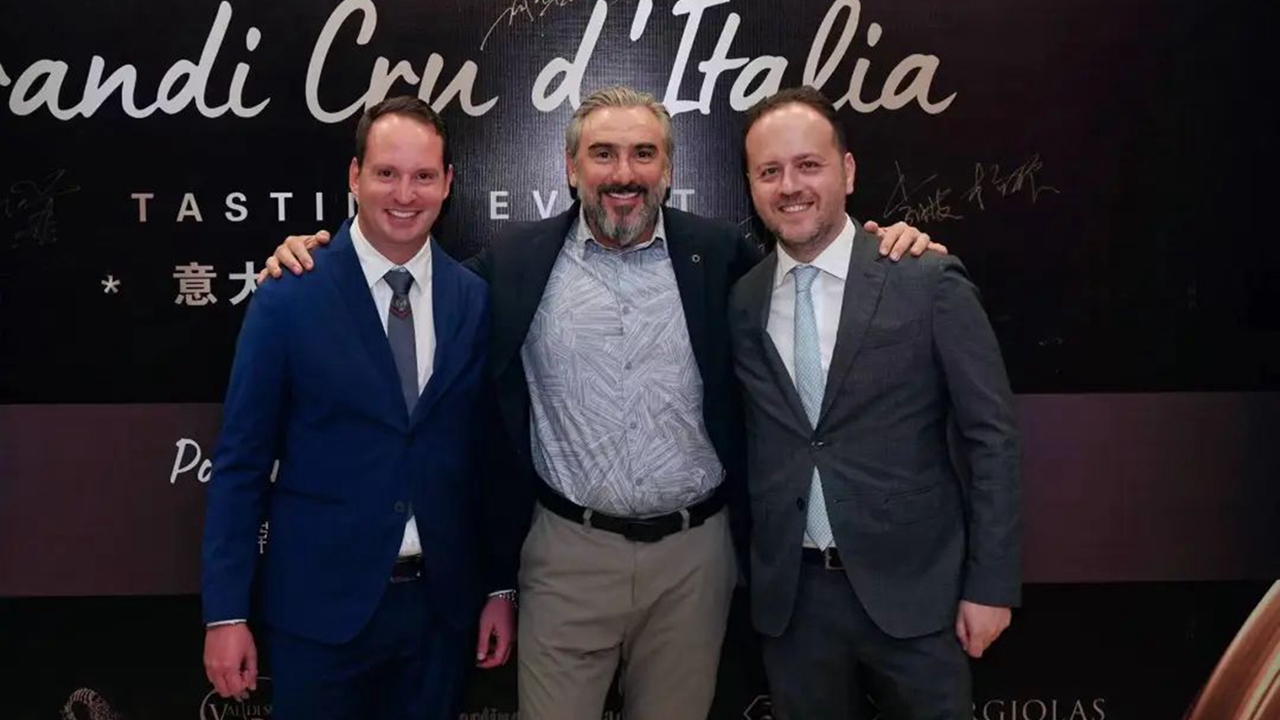 Alessandro Mugnano (L) and Ferdinando Rizzo (R) pose for a photo with a client at a wine tasting event June 8.

Courtesy of the interviewees.

“It’s true that some channels like restaurants were forced to close, but one of the greatest advantages in China is that we can sell wine in many other different channels. What we developed during this time is our sister company called Alawino, which focuses on online business. We are present in all the main marketplaces, then we started to develop social media channels for Italian wineries going from WeChat to Weibo to the Little Red Book (Xiaohongshu). That’s the reason why we made these happen in such short time,” Mugnano explained.

Palmentieri added that another key point to their success is they have invested a lot of money to teach their team how to sell. They also successfully organized another wine tasting event June 8. 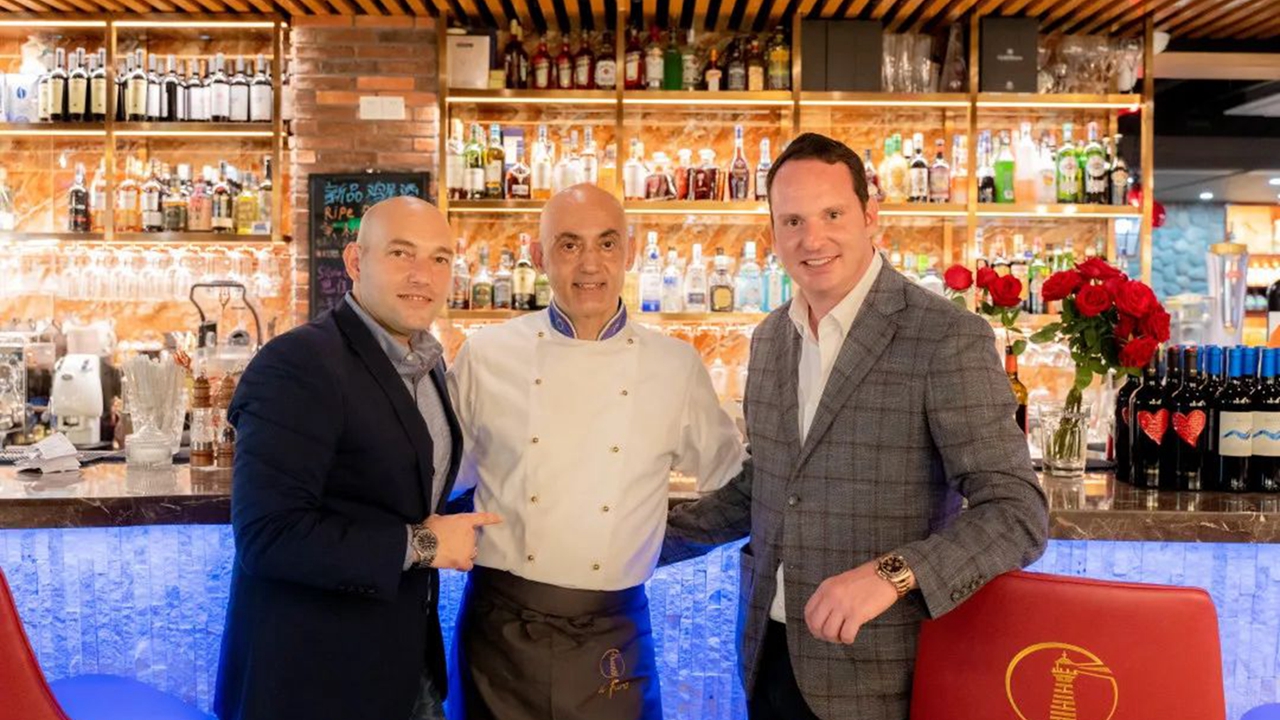 (From L) Enrico Palmentieri, Diego Di Costanzo and Alessandro Mugnano pose for a photo in the Italian restaurant Il Faro.

In addition to their ever-growning wine business, they accepted the invitation from chef Diego Di Costanzo to bring to Shenzhen a three-generation Italian restaurant in Napoli and opened an Italian restaurant named Il Faro in Shekou in March. The restaurant offers authentic Italian pizzas and other mouth-watering Italian food. 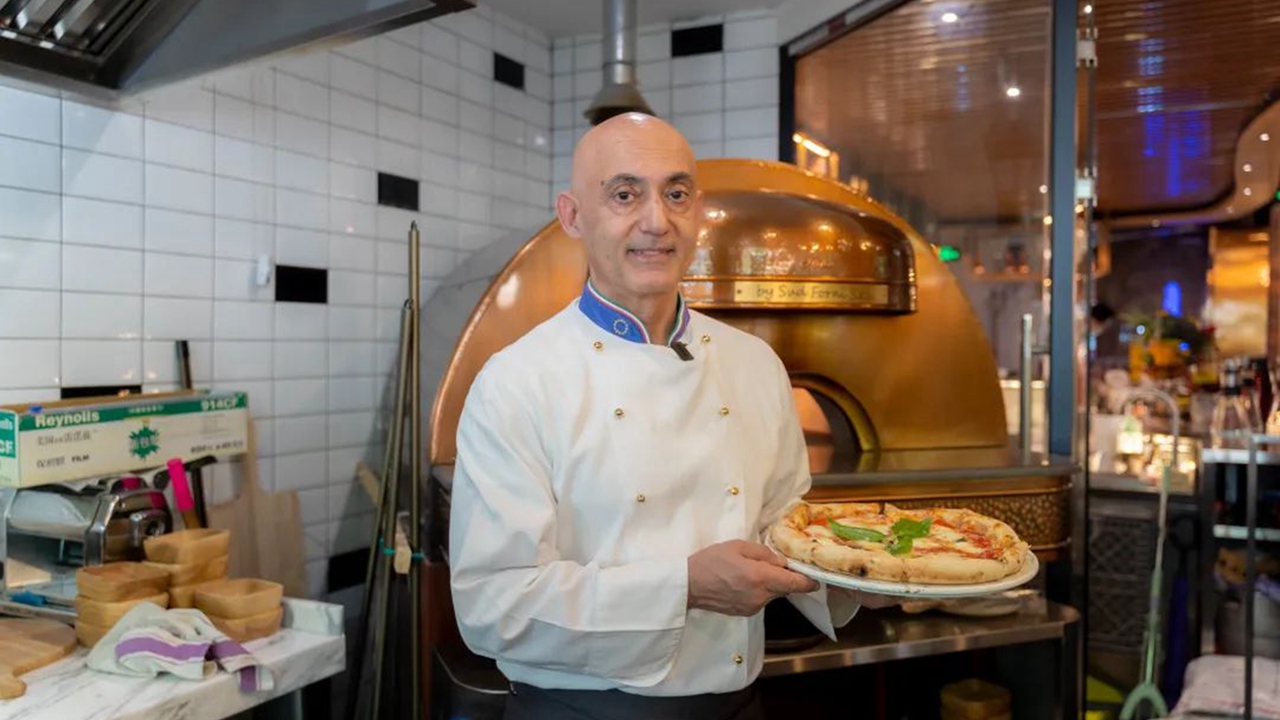 One funny anecdote was that the restaurant was opened one day before the city was locked down for one week in March. “So, we waited for a couple of weeks and we started with the delivery and then later on, after two or three weeks, we opened it for dine-in service in April. I have to say that we are very happy about the business, thanks to the support of a lot of friends and customers,” Mugnano said.

With the restaurant’s success, Mugnano and his partners are planning to open another branch in Luohu by the end of this month. 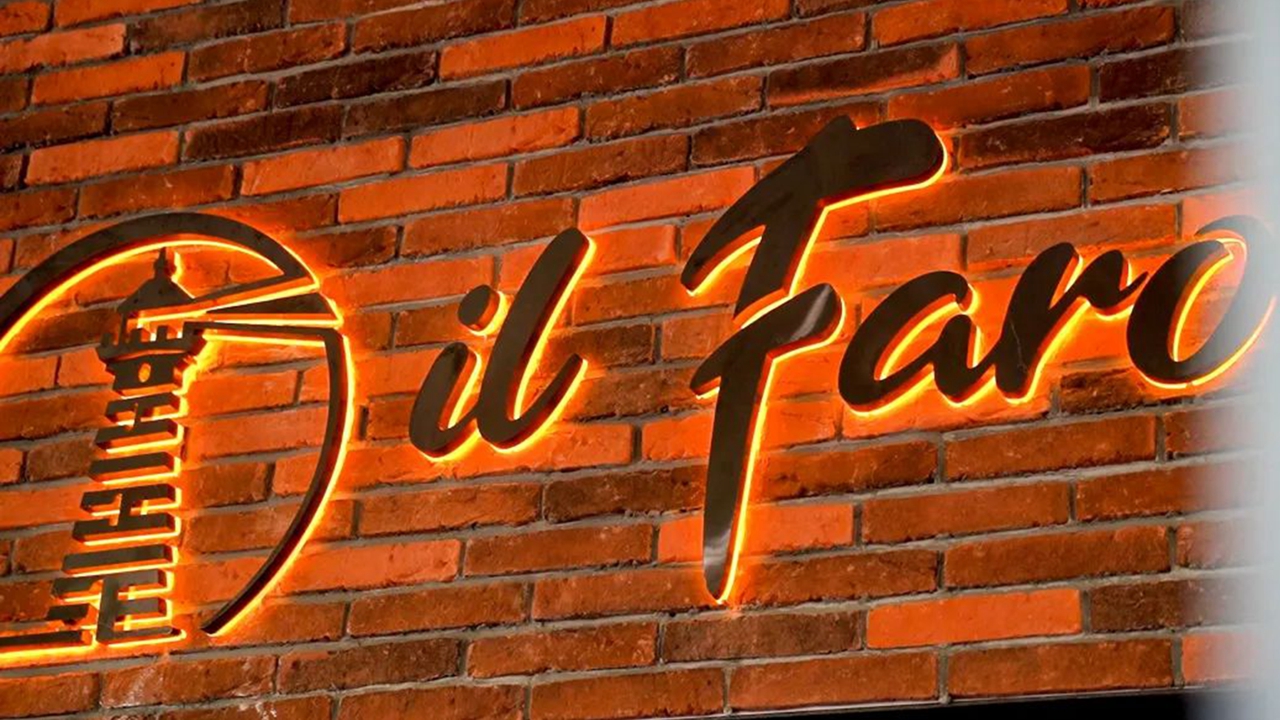 When Mugnano was interviewed by Shenzhen Daily in 2019, he said China was the future. Three years after, the Italian entrepreneur reiterated his strong confidence in the Chinese market.

“Now in 2022, I’m happy to tell you that I’m double confident than 2019. How this country carries out the control and prevention of the pandemic while developing its economy at the same time is something that really impressed us. A lot of countries worldwide will take years to overcome the impact of the pandemic. China did it in the fastest way and gives us a confidence to develop and to grab all the new opportunities that this market gives us,” Mugnano said.

For them, the company’s growth speed is the epitome of Shenzhen speed. “Shenzhen is a young and dynamic city with a fast development speed. I still remember it 12 years ago, which was far away from the Shenzhen today. I am so proud to come here,” Mugnano said. 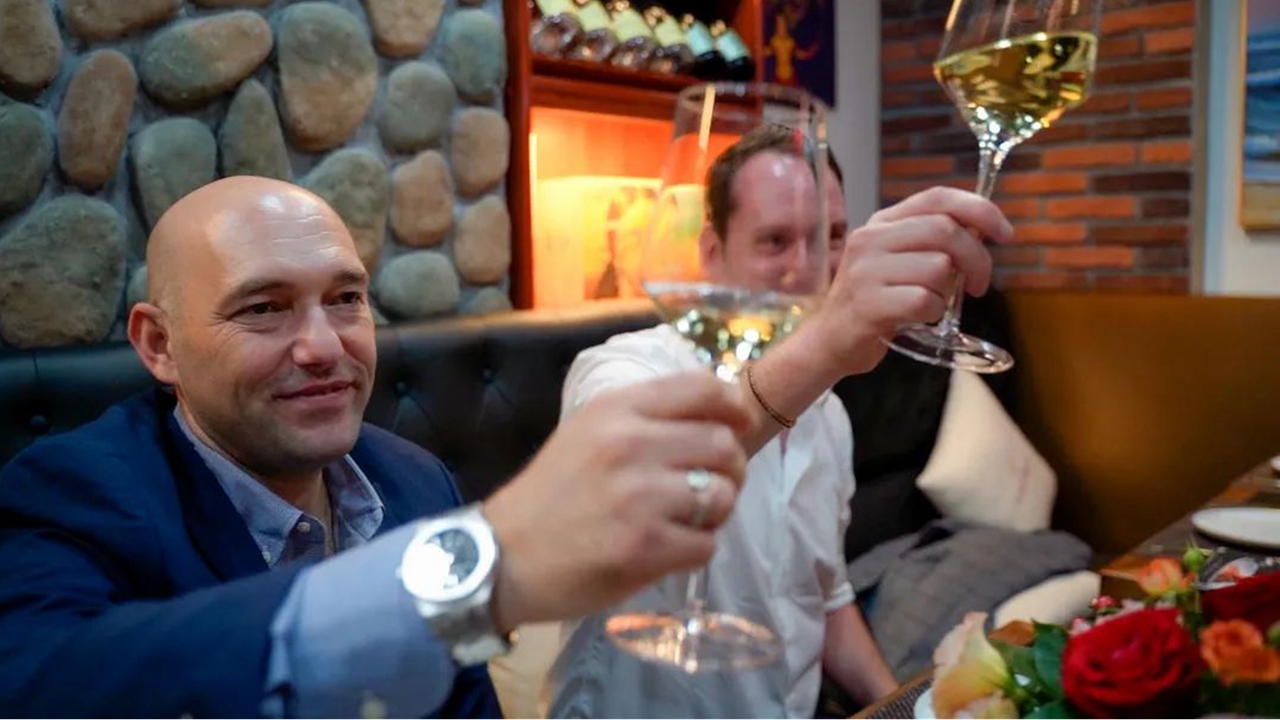 Enrico Palmentieri (L) and Alessandro Mugnano have a toast at Il Faro.