A coral germplasm bank project was launched by the Shenzhen Institute of Guangdong Ocean University (SZIGOU) on Tuesday. It is expected to be the largest and most complete bank of its kind in China, according to an announcement during an event to mark the Third National Coral Day.

The event themed “protect the corals, protect our ocean” was held in Dapeng New Area on Tuesday.

According to the announcement, a 500-square-meter area collecting around 100 coral species has been built for the first phase of the project.

The event also launched the third nationwide survey of coral reefs and unveiled a coral restoration project, aiming to put 20 artificial coral reefs and plant 4,000 fragments of stony corals under the sea of Dapeng Bay. 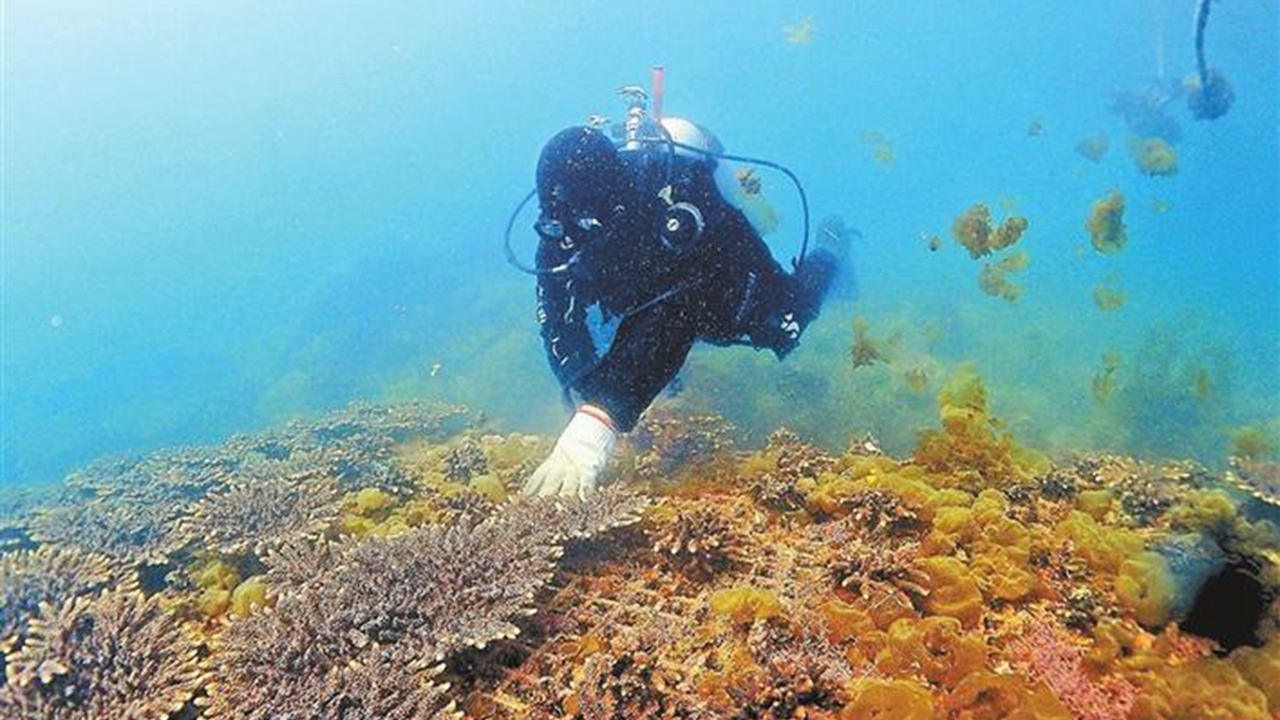 A researcher of the Shenzhen Institute of Guangdong Ocean University (SZIGOU) attends to coral seedling under the sea of Dapeng Bay in this undated photo released Tuesday. A coral germplasm bank project was launched by the institute Tuesday to mark the Third National Coral Day. It is expected to be the largest and most complete bank of its kind in China. Courtesy of SZIGOU

Stony corals were classified as animals under the country’s Grade-II conservation, and SZIGOU will also be in charge of the project.

Coral reefs created by stony corals are the most diverse and prolific ecosystems in the world. Occupying less than 0.2% of the ocean area, coral reefs are home to nearly 25% of all marine life.

“My most enjoyable moment is to see the forests of the ocean,” Yang Xiaozhou, who works for SZIGOU, told the News.

Yang and his colleagues were responsible for planting and breeding corals, and cleaning fishing nets and plastic objects under the sea every month. They would collect some corals if weather conditions allowed.

Normally, they conducted such tasks for 10 to 15 days every month and worked mostly underwater for a whole day for each time.

The team of SZIGOU has recorded the first coral spawning – the stony corals planted under the sea of Dapeng Bay were reproducing by releasing their eggs and sperm all at the same time, which brings more hope to coral reef restoration and further promotes the research of sexual reproduction in stony corals.

As of now, Shenzhen has established a mature system for coral conservation. The city is set to build a State-level marine ranch in Dapeng Bay at the end of this year, which will be China’s first sea farming project focusing on coral protection.

According to data, Dapeng New Area has observed and recorded 23 coral species and 10 types of reef fish.