The set of draft park regulations recently released by the Shenzhen Municipal Urban Administration and Law Enforcement Bureau was the first of its kind in the city.

Zhai Shengqiang from Peking University Shenzhen Graduate School said the regulations will help improve park management and at the same time, let citizens realize that parks are not only leisurely places but also play an important role in the city’s low-carbon development, which is conducive to promoting green ecology to society.

Commenting on the proposed fine for releasing animals in parks, citizens interviewed by Shenzhen Daily mostly support the move since animals released into the parks might threaten the local ecosystem. 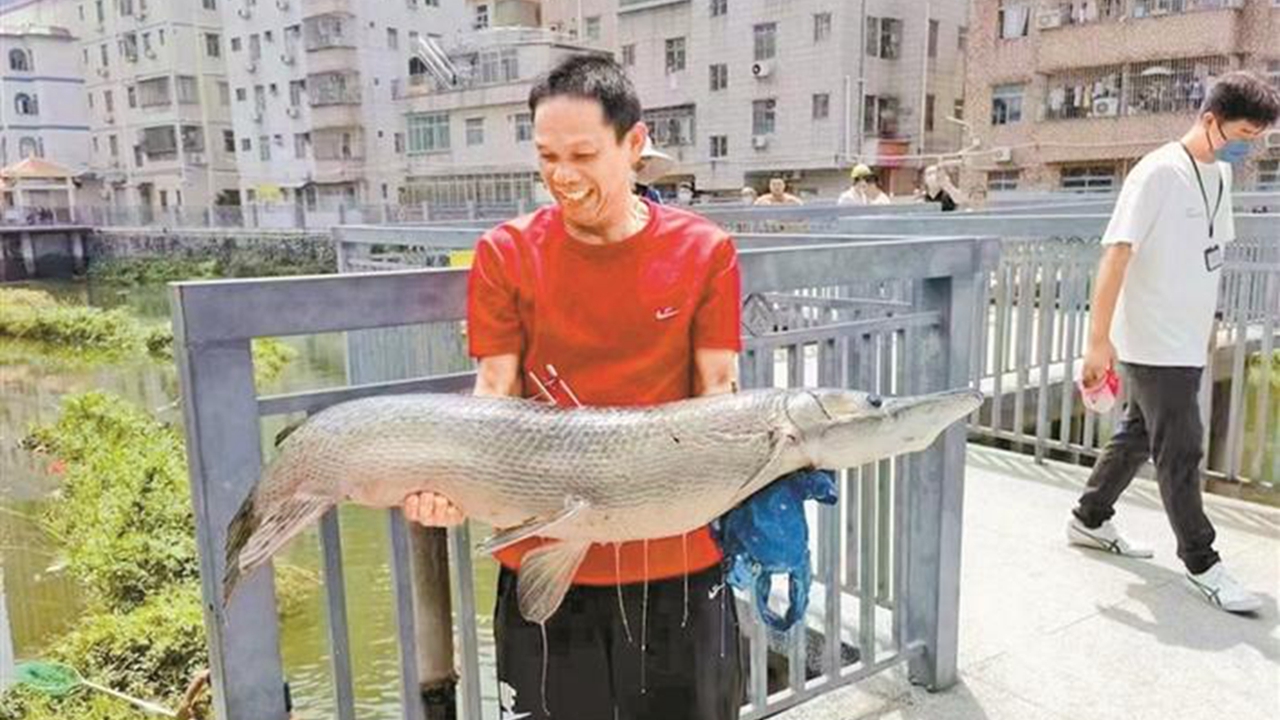 A man holds an alligator gar caught from a pool at Guantian Community in Shiyan Subdistrict, Bao’an District. Alligator gar is a carnivorous fish that comes from North America. It was introduced to China as an ornamental fish. Shenzhen Special Zone Daily

A financial worker surnamed Guo observed that it is necessary to prohibit people from randomly releasing animals in parks because foreign animal species will seriously impact the local ecosystem. Guo added that as more parks have been built across the city, the regulations are needed to improve management.

Another citizen, surnamed Zhang, who works in law, said that setting fines has positive impacts. “The fine has a wide range – from 500 to 5,000 yuan (US$69-695), so that law enforcement officers have the flexibility to decide the amount according to the severity of the violation,” Zhang said.

According to the country’s wildlife animal protection law, unscientific release of animals constitutes a violation of law. Invasion of over 660 exotic species had been detected nationwide, and 71 of the released species had reportedly caused a threat or potential threat to the natural ecosystem, according to China’s ecological environment bulletin published last May.

Different types of turtles have been suspected of being released by residents at Futian Mangrove Ecological Park and Lianhua Hill Park, according to previous local media reports.

A citizen surnamed Wang advised that more attention should be given to the discovery of animal releasing activities as citizens are not required to undergo checks upon entering parks. Previous reports showed that in many cases the animals improperly released were found only after the local ecosystem had been negatively impacted.