As the Spring Festival is around the corner, many restaurants in the city have been almost fully booked for family reunion dinners on Chinese New Year’s Eve, according to Shenzhen Evening News.

“We set up two rounds for the Chinese New Year’s Eve dinner period. The first round is from 4:30 p.m. to 6 p.m. which were fully booked. Dinners for the second round, which is from 7 p.m. to 10 p.m., have been 80% booked. The booking volume has basically returned to the level of three years ago,” said Chen Zhiwei, operational director of Chaojiangchun, a time-honored restaurant in Futian CBD.

Chen said over 200 restaurant employees will serve on Chinese New Year’s Eve, which falls on Saturday this year, and they will also recruit part-time employees depending on the crowd situation.

Instead of going out for a Spring Festival reunion dinner, some citizens chose to purchase ready-to-cook dishes so that they could enjoy tasty food at home with family members. 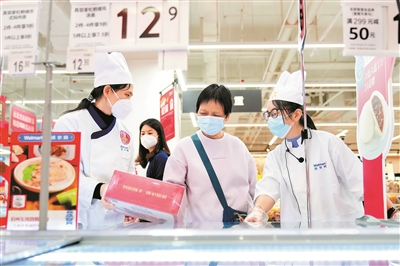 Chaojiangchun restaurant sold out over 1,000 ready-to-cook Poon Choi, or basin meal, which is a popular Cantonese dish served on the Lunar New Year. The meal signifies family reunion, abundance and affluence in the coming year, according to Chen.

“My parents will come to Shenzhen to spend the Spring Festival with me. I decided to prepare for dinner by ordering ready-to-cook dishes online,” said a citizen surnamed Bai.