Two cultural workshops on dough sculpture were held at Shenzhen Museum on July 22 to popularize intangible cultural heritage and to see how it can be revitalized in modern life. 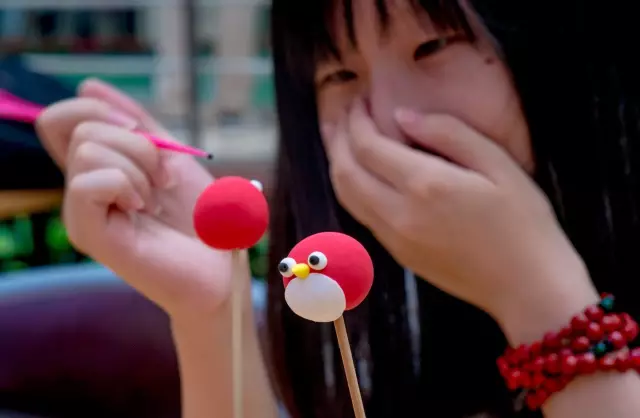 A girl laughs after giving a final touch to her dough work at Friday’s workshop. Photos by Liu Xudong

Ren Chunhua, a handicrafts woman from Central China’s Henan Province and a successor of a dough sculptor, gave a vivid lesson on making dough sculptures of Angry Birds to 40 children at the workshops organized by the museum.

Before workshops began, children were quite curious about the various dough sculptures of cartoon figures and flowers that Ren brought to the event. Ren then instructed them, step-by-step, in how to make an Angry Bird using ready-made colored dough and sticks. 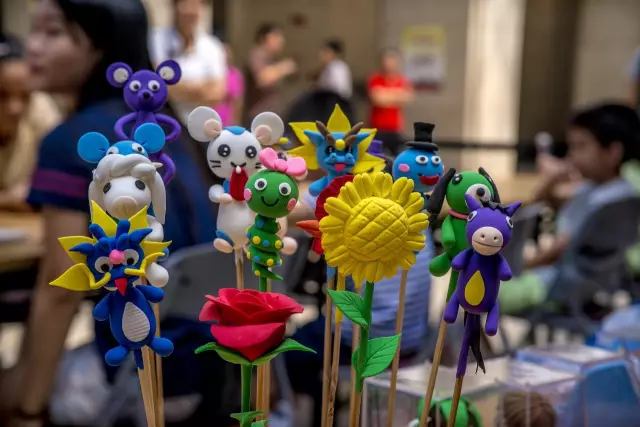 An array of dough sculptures created by attendees.

As an intangible cultural heritage, dough sculptures date back to the Han Dynasty (206 B.C.-A.D. 220) and are popular in northern China. Usually they are created in traditional themes such as dragons, magpies, folktale figures or historical figures.

According to Ren, when people made traditional dough sculptures in the past they would use flour and glutinous rice flour as the main raw materials, and then add some components like color, paraffin and honey. It is a type of folk artwork that is easy to make, but has a very high artistic value. Nowadays, people can buy colored dough mixed with preservatives from shops and use simple tools like scissors, knives and sticks. “This is a meaningful activity. I want my child to enhance his handicraft ability, and to know more about our traditional culture,” a young mother said at the event.

“In my hometown, there are fewer and fewer people who can make dough sculptures. The young generation doesn’t even know what it is. I feel responsible for revitalizing the art of dough sculptures. In Shenzhen, the local government creates a very favorable environment to popularize it,” Ren told the Shenzhen Daily.

The Shenzhen Municipal Government has been working on the protection of traditional culture for many years. In recent years, more governmental funds and manpower have been pumped into the protection and popularization of intangible cultural heritages. People are getting more access to these traditional treasures by attending festive celebrations and free workshops.