It's an age featuring innovation and speed, where the drawn-out jingles of camel bells on the ancient Silk Road have been replaced by the roaring of high-speed trains. Musicians, standing at the apex of their field, are clearly aware that there is a need to present a new visage of traditional Chinese music for it to fit in with fast-changing modern beauty aesthetics — not only for audiences at home but also for across the world, and at the Plum Blossoms, Orchid, Bamboo and Chrysanthemum concert held last Friday, their endeavors paid off under the blessing “break a leg.”

The pipa, erhu, guzheng and bamboo flute, which are hailed as the hallmark instruments of traditional Chinese music, have their unstopping transformations moved on in terms of composition, performance and structure, and for the first time, Western percussions, along with the frequently-used pianos, were performed in the accompaniment. 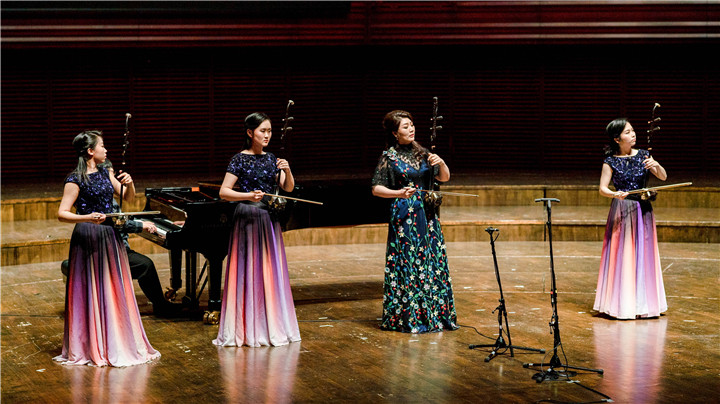 The beholders at the world premiere of the commissioned erhu quartet piece “The Cowherd and the Weaver Girl,” which was composed by Derek Cooper, an award-winning musician teaching at Ramapo College of New Jersey’s School of Contemporary Arts and Manhattan School of Music, fixed their eyes on the strings of erhus sounding in the hands of the “Le Dao” erhu ensemble, an artist combination founded by “Chinese Erhu Queen” Song Fei and composed of her students, and were fascinated by the violin-like music they produced.

The American composer stated in his message that the vicissitudes of the household love story were expressed in the three sections of the composition, where he tried to blend his own ideas with those of traditional Chinese music.

Song spoke highly of Derek’s piece and told the Shenzhen Daily that she was pleasant to see that traditional Chinese music has become more recognizable around the world. “The emotions embedded in Chinese and Western music are interlinked. So, there is no wonder why pieces like ‘River of Sorrow’ can resonate with foreign audiences,” said Song.

Western compositions like Robert Zollitisch’s “Wind Sword” and Rimsky Korsakov’s “Flight of the Bumblebee” were also reinterpreted by bamboo flute and pipa respectively.

Holding that pipa, dubbed the Chinese version of the lute, which is the jewel in the crown of the infusion between Chinese and Western musical instrument, Wu Yuxia, a pipa master, staged a crossover performance of her piece “Dances from the Heavenly Palace” with percussionist Zhu Jianping, where the silvery plucks of pipa were perfectly blended with the thundering beats of the cajón, a box-shape percussion instrument that prevailed in Latin and jazz music, to portray the graceful dances of the Flying Asparas.

“The composition pictures the mural paintings of Mogao Grottos in Dunhuang, which can remind the audience of the aura on the ancient Silk Road. Our musician should bear the inclusive spirit of the Silk Road in mind and take confidence in promoting the essence of Chinese culture to the world,” said Wu.

The transformation of guzheng performance was marked upon the completion of the piece “Fighting against Typhoon” in the 1960s, and carried on by a sequence of trailblazers, including Wang Zhongshan, one of the most influential guzheng artists in contemporary China. In this year’s Belt and Road Music Festival, Wang staged the adaptive version of “Immersing in Spirit,” an ancient guqin piece composed by Chinese literatus Ruan Ji (210 - 263) speaking about a drunken experience.

Wang told the Shenzhen Daily that the guzheng, which has 21 strings while guqin only has seven, can express the emotions embedded in Ruan’s composition in an untrammeled way. “The traditional interpretations of the guqin piece often focus on the drunkenness of the composer, where he keeps drinking from tipsy till hammered, and even pretends to be drunk with staggering steps after sobering up. While performing the guzheng, I will emphasize more on the feigned craziness of the composer who immersed himself in spirits to forget about worldly concerns.”

Similar to guzheng, it was the trailblazing musicians that propelled the transformation of bamboo flute. To carry on the behest of his late teacher and bamboo flute master Zhao Songting, Dai Ya, one of the most influential bamboo flute artists in China, developed the original six-hole structure of the musical instrument into eight holes in order to improve its adaptability with accompaniments fulfilled by Western musical instruments such as piano and violin. At Friday’s concert, he staged the piece “Qinchuan Love” with the “Voice of Dragon” flute ensemble, winning continuous applause from the audience.

According to Li Shaosheng, one of the planners of the Belt and Road Music Festival, at this year’s edition of Plum Blossoms, Orchid, Bamboo and Chrysanthemum concert, which has been a recurring repertoire at the music festival, it is the first time that one-to-one correspondences have been fulfilled between images of flowers in the theme and the four major musical instruments performed onstage, where the maestros, together with four artist combinations consisting of prominent musicians specializing in other fields of folk music and students from top music academies in China, presented the audience with a new visage of traditional Chinese music.