Artist: determined people and diversity the charm of city 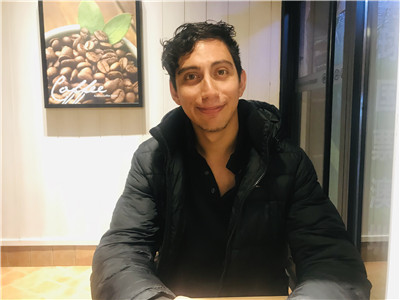 Almost one month after arriving in Shenzhen, 27-year-old Jaime Borjas from Chihuahua, Mexico, had a chance to see some of the most dazzling faces in the city — he was commissioned to perform at Shenzhen’s 2019 Spring Festival Gala as a member of the Window of the World dance team.

“The experience of dancing on a stage of such magnitude was amazing. It is one of my best memories up to now,” said the pianist, dancer and art teacher, who previously worked at Fine Arts Autonomous University of Ciudad Juarez.

For their almost one-minute show, the team prepared for one month, making alterations to meet the gala organizers’ fast-changing plans. The gala made a stir in the country in February due to its emerging-technology elements, such as drone and robot shows, flexible screens, sky rail and fantasy light show featuring 43 high-rises decked out in synchronized neon lights.

However, Borjas sees beyond these features. “The high-tech elements were no doubt eye-opening, but what impressed me the most was the way people worked and cooperated,” said Borjas. He described the mentalities of his over 1,000 counterparts in the gala as determined, self-disciplined and perseverant. With 18 years of experience as a dancer, a profession that requires strong teamwork, unwavering determination and lasting persistency, he has a knack for identifying these character traits. “These are actually the qualities I have constantly observed in my Chinese friends. I think it’s the character traits of its people that define the spirit of the city, and they help me to understand what the city has achieved today,” he said.

Borjas came to Shenzhen on a one-year tour contract with FStardance Entertainment to perform at Window of the World theme park. He and his co-dancers perform four shows a day. Although he enjoys the relaxing ambience at Shekou Sea World and the sea-front view of eastern Shenzhen as much as any other new resident, he puts Huaqiangbei at the top of the list of things he would miss about Shenzhen if he leaves one day.

“I found some pianos at the metro exits in Huaqiangbei, and people are encouraged to play the pianos if they like. I really like the idea,” the young man said with a laugh. The pianos, eight in total, were donated by a local company and placed in public areas after a music festival was held in Huaqiangbei last November. Playing the pianos at one of the metro exits has become a can’t-miss activity whenever Borjas visits Huaqiangbei. “It shows the openness of a place and really adds fun to life,” the cheerful artist said.

Similar to the way he was wowed by the different kinds of dances and cultures presented on a single stage for the Spring Festival gala, Borjas is fascinated by the fact that he has met so many people from around the world in Shenzhen. “Diversity is the charm of Shenzhen,” he said.

Although he is fascinated by Shenzhen’s modern, vigorous and high-tech features, Borjas still yearns to explore more of China. “Shenzhen is undoubtedly a charming and inspiring city, but it represents only one side of China,” he said. The young artist said he would also like to visit the Great Wall, to look into the history of the country as well as its different landscapes.