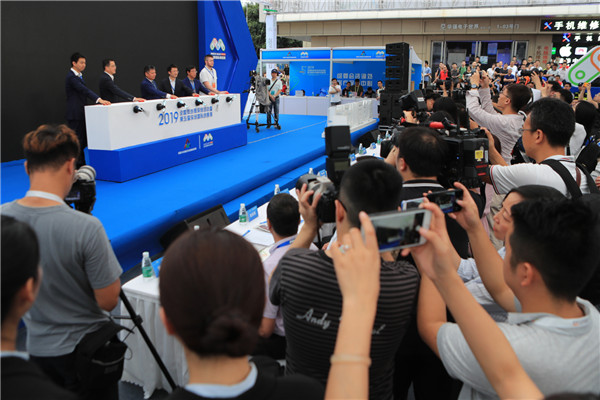 Government officials and guests at the opening ceremony of Maker Week in Huaqiangbei on Thursday.

Themed “Make with Shenzhen,” this year’s maker week will continue to highlight the power of entrepreneurship and innovation, focus on cutting-edge technologies, connect maker projects and stimulate the enthusiasm of the masses for innovation and entrepreneurship.

There will be a total of 22 major activities at the main venue in Futian and 14 subvenues across the city during the maker week, which will run through Wednesday. 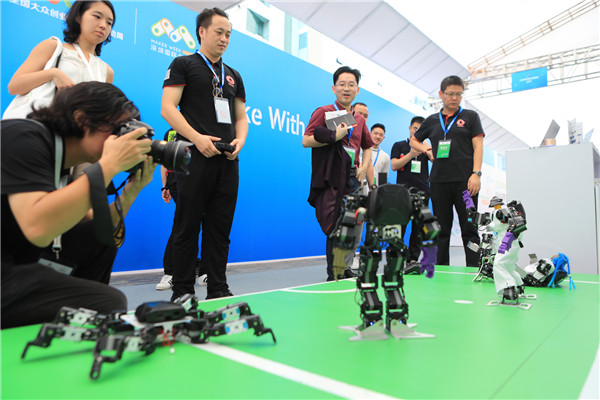 Zeus robots, developed by Shenzhen Zeus Robot Co. Ltd., do somersaults while visitors look on at a Maker Week event in Huaqiangbei on Thursday.

Activities at the main venue include the launch ceremony, a themed exhibition, an exhibition on the achievements of international makers at Huaqiangbei and SEG Plaza, and a thematic activity titled “Co-create·Empower Your Future” at Futian Hi-tech Exhibition Center.

Residents can get a glimpse of the world’s top-notch wearable devices, IoT applications for smart households, intelligent robots, 3-D printing technology, holographic projection, virtual reality (VR), and augmented reality (AR) and mixed reality (MR) technologies, as well as get to know how these new technologies will bring about immense changes in our daily life.

Garret Winther, partner and program director with HAX, said he was amazed by the speed and potential of Shenzhen when he first visited the city six years ago. HAX is a seed accelerator focused on hardware startups. Over the years, he returned to Shenzhen many times and was so amazed by the opportunities in Shenzhen that he left his previous job in London and moved to Shenzhen with his whole family. An expat maker with HAX, a hardware accelerator maker space in Huaqiangbei, smiles while his co-maker gestures to a robot they developed.

Niu Xinyu, founder of Shenzhen Corerain Technologies Co. Ltd., said Shenzhen is a city that never fails a hard worker. “Whether it’s Shenzhen’s business environment and support to makers or the Greater Bay Area’s policies, it is the best era to start a business in Shenzhen.”

People who intend to visit the main venue can scan the QR code below to make a reservation. 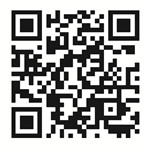