A strategic cooperation agreement was signed between Shenzhen and ByteDance in the city Friday. Both sides agreed on closer cooperation to promote the construction of ByteDance’s headquarters in the Greater Bay Area. 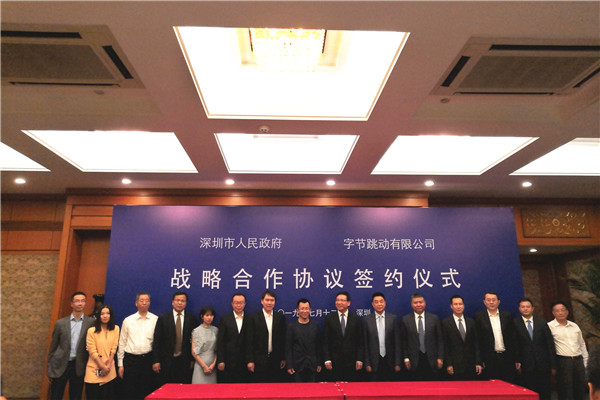 Shenzhen Mayor Chen Rugui met with a delegation led by Zhang Yiming, founder and CEO of ByteDance, before the signing of the agreement.

According to Chen, Shenzhen is embracing a series of important strategic opportunities, such as the accelerated construction of the Guangdong-Hong Kong-Macao Greater Bay Area, and has very broad prospects for future development.

He hopes that ByteDance will fully combine its advantages and expertise in promoting Internet application innovation with the city’s sound environment for innovation and entrepreneurship, and play a leading role in the field of smart city construction.

Zhang said the company will strive to build its Bay Area headquarters into a research and development center with industry competitiveness, provide innovative Internet products to the industry, and make contributions to the innovation and development of Shenzhen.