Twenty-five reproduced antique nautical charts in Europe are on display at the “From Mediterranean to South China Sea” exhibition, exploring Shenzhen’s geographic role in the global maritime trade history.

According to the exhibition organizer, Dapeng Marine Library, the reproduced charts are authorized by national libraries in Europe. Paintings of landscapes in the 19th-century Pearl River Estuary and waterways in Guangzhou and Macao are also on display.

“Although there’s no text records of Shenzhen in the world’s maritime trade history, Shenzhen did appear in many antique European nautical maps and this exhibition tries to tell some untold marine stories of Shenzhen, a coastal town with 1,600 years’ history,” reads the exhibition profile.

In different maps drawn by different cartographers, a place at the Pearl River Estuary was variously marked as “Lamtao,” “Nanto” or “Namtoo,” and researchers believe these names may all refer to Shenzhen.

In a 1599 map currently housed at the National Library of Portugal, the ancient Dapeng Peninsula was marked as “Lanpacao.” In another map, “Lampacao” was marked at Shenzhen’s location and this Portuguese word may refer to the modern Kuichong and Bagua areas in Dapeng. 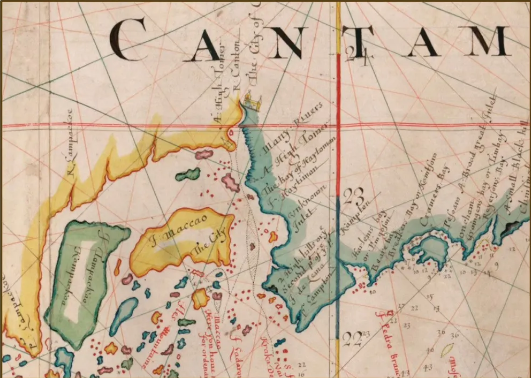 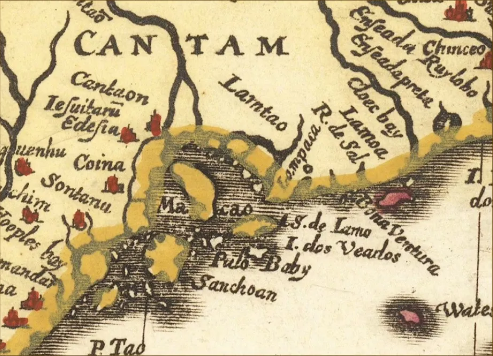 In a nautical chart used by Portuguese explorers and currently housed at the National Library of France, an unknown place marked only with “many rivers,” “two high hills,” “a small black hill” and other ambiguous notes is also believed to be Shenzhen.

According to the exhibition profile, in the 15th-16th centuries, Western nautical maps were drawn by cartographers in Rome and Venice based on information provided by missionaries who traveled back from the East.

In the 17th-18th centuries, Portuguese and Spanish people had arrived in Asia and they used a portolan chart, also called harbor-finding chart or compass chart. The portolan charts were characterized by rhumb lines which radiate from the center in the direction of the wind or compass points and that were used by pilots to lay courses from one harbor to another. 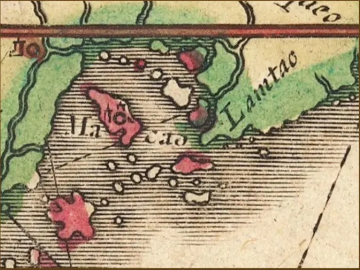 In the 19th century, modern nautical charts were made by British cartographers based on modern surveying and mapping technologies.