Guizhou Province, located in Southwest China, has been a low-profile travel destination compared to its neighbors such as Yunnan, Sichuan, and Chongqing. However, as home to multiple ethnic groups and blessed with diverse landscapes, the province has gained increasing popularity among travelers from home and abroad in recent years.

In March and April, the province has taken on a new look with flowers in full blossom. As the Qingming Festival holiday approaches, why not take a few days off to wander in nature? Here are some places that show Guizhou’s natural beauty. 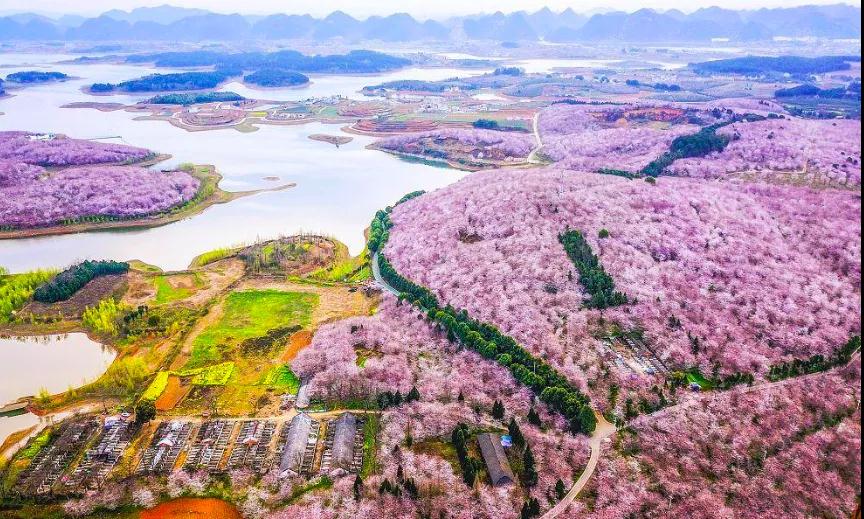 The Pingba Farm in Guizhou Province is known as the province’s best cherry blossom viewing spot. In spring, over 500,000 cherry trees in the farm come into full bloom and turn the place into a pink fairy land. In addition to the cherry blossoms, the farm has much more to offer. Along the tracks, old camphor trees form a dense canopy, a scene not frequently found in other places. If you take a stroll along the main road of the farm, you’ll also find soothing lake views and picturesque mountains planted with tea trees.

In March and April, the village cluster of the Buyi ethic group in the Panjiang Township, Guiding County, is covered in a golden ocean of rapeseed flowers and walled in ridges of snow-white plum blossoms. This area, known as the most featured community of the Buyi people, has 11 Buyi villages such as the Yinzhai, Luohai, Zhulinbao and Maidong villages.

The Xijiang 1,000-household Miao Village is the world’s largest Miao village and is considered an open-air museum to study the history and culture of the Miao ethnic group.

Located amid mountains, the village has more than 1,200 Miao-style wooden stilted houses, known as diaojiaolou, built along the hillside. It is also considered to be the place where the most preserved Miao way of living can be seen. 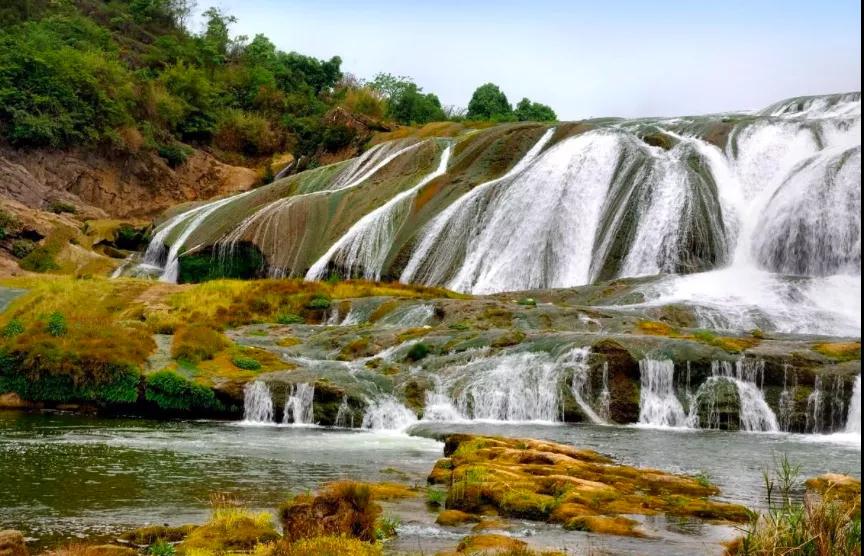 The centerpiece of the cluster is the main Huangguoshu Waterfall. It is a 78-meter-high and 101-meter-wide wonder. Behind the waterfall, there is a 134-meter-long cave called Shuilian Cave. With six windows and five halls, the cave allows visitors to view the grand waterfall from different angles.

Another waterfall worth visiting is the Doupotang waterfall, the widest one in the cluster. The waterfall is nicknamed the “roaring waterfall,” because of its loud rumbling sounds before a flood strikes.

If you are looking for somewhere with a different view, the Tianxingqiao area proves to be an ideal place. Here you’ll find a beautiful combination of water, plants, and stones, as the stalagmites rising from the water and the plants around it form into elegant clusters of natural bonsais.

In addition to the alluring scenery, Guizhou is also a heaven for foodies. If you love spicy and sour food with a touch of umami, you won’t want to miss the Guizhou cuisine.